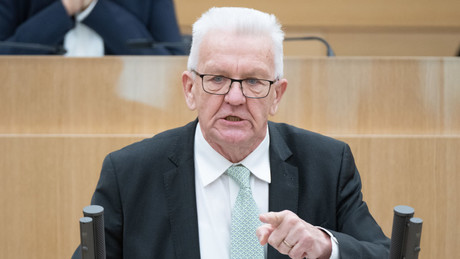 Baden-Württemberg Prime Minister Winfried Kretschmann (Bündnis 90/Die Grünen) feels that a debate about exit strategies from the Corona crisis before Easter is currently too premature. Since the state of Baden-Württemberg has just passed new regulations, he cannot understand this discussion.

During the open question and answer session at a press conference on the corona situation in Baden-Württemberg, Prime Minister Winfried Kretschmann (Bündnis 90/Die Grünen) spoke about possible plans for an early end to the current corona measures questioned and about the recent easing in neighboring countries. Referring to the German political path, Kretschmann was irritated and emphasized that he “does not see it at all” that an exit strategy before Easter could even be debated. He replied verbatim: “We’re not starting an exit strategy debate right now,” that would be inappropriate and “sent a completely wrong signal.”

The recently decided tightening in Baden-Württemberg, such as the FFP2 mask requirement in local public transport, cannot be immediately “counteracted” by “unfounded exit debates”. One is still in a dramatic situation, according to Kretschmann. Corresponding plans for easing before Easter were not addressed at the last Prime Ministers’ Conference (Mpk). He will do so, but “obtain advice from his scientific advisors beforehand”. He doesn’t want to rule out anything, says Kretschmann. However, the Prime Minister dampened hopes that there could be any easing before February 16 – the next date of the MpK. Most commentators on social media reacted with incomprehension, referring to Kretschmann’s unmistakable statement:

Also #Kretschman has per #MPK-Resolution obliged to develop opening perspectives. 8 days later he speaks of “unfounded exit debates”. But what are political promises… ??‍♂️ https://t.co/qTbktsmVzi

Regarding the situation in other European countries, based on a wide variety of modifications and easing of corona measures, Kretschmann only replied: “I would advise the Germans to comply with the law.” You still have to be careful, the incidences “would shoot through the roof”. Kretschmann emphatically affirmed that the rules that were recently decided continue to apply.

When asked about his controversial statements on the subject of scientific advice to politicians, Kretschmann reiterated his point of view. According to the Stuttgarter Nachrichten, he recommends “restraint on political issues” because this could undermine the authority of scientists. The obligation to vaccinate, for example, is “a political decision” and “a virologist has no special competence here,” said Winfried Kretschmann at the government press conference on February 1.

More on the subject – “Days of joy” in sight: Switzerland announces relaxation of corona measures