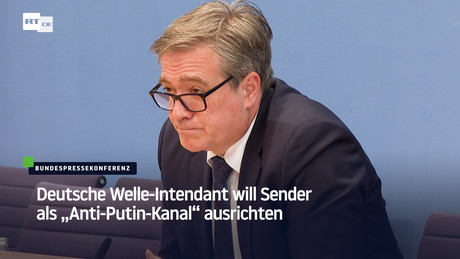 Olaf Scholz and the Federal Foreign Office have no justification for the unequal treatment of RT DE. The Chancellor also does not assess the use of the station as a weapon against Russia, as announced by the director of Deutsche Welle. That was the result of the federal press conference.

In the federal press conference on Friday, RT editor Florian Warweg asked the spokesman for the Chancellery and the Federal Foreign Office for a reason for the different treatment of RT DE compared to other state broadcasters, which are allowed to broadcast unhindered in and from Germany:

The deputy spokeswoman for the Foreign Office, Andrea Sasse, who was visibly struggling to keep her composure, categorically refused to justify the different treatment and, without being asked, dodged a comparison between RT DE on the one hand and Deutsche Welle in Russia on the other.

Following on from this, Warweg asked the deputy government spokesman Wolfgang Büchner to explain how the announcement by the Director General of Deutsche Welle, Peter Limbourg, that since 2014 a “Anti-Putin broadcaster” to want to shape is to be reconciled with journalistic independence and neutrality, and how Federal Chancellor Olaf Scholz assesses this.

Büchner also refused to answer the question with reference to the “independence of media workers in Germany”:

“The chancellor doesn’t even evaluate such statements by a manager. You can see from that the peculiarity that we are dealing with here, namely the independence of media professionals in Germany.”

Deutsche Welle is subject to the legal supervision of the federal government. Only the technical supervision of the journalistic and editorial content of broadcasts and publications, which is exercised solely by the Broadcasting Council, is excluded. The Broadcasting Council of Deutsche Welle currently consists mainly of politicians and current or retired civil servants. It is astonishing that the Federal Chancellor does not form an opinion on a line of open interference in the internal affairs and the daily politics of another sovereign state announced by the Intendant.

Protecting the journalistic freedoms of Deutsche Welle employees would rather put the cold warrior Limbourg in his place within the framework of legal supervision.

More on the subject – Election boycott, activism, Nazi comparisons – Deutsche Welle and its “values” in practice