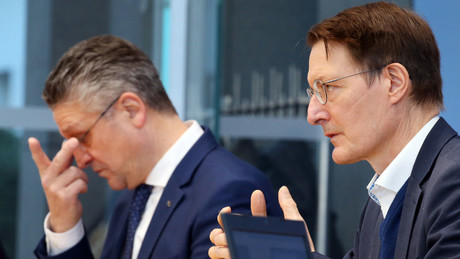 A dispute has broken out in the traffic light coalition over the director of the Robert Koch Institute, Lothar Wieler. Bijan Djir-Sarai (FDP) hinted at his replacement in a Spiegel interview. Meanwhile, Lithuania and Georgia suspended restrictions on the unvaccinated.

In a published on Saturday interview With the mirror, the designated FDP General Secretary Bijan Djir-Sarai accused the head of the Robert Koch Institute Lothar Wieler of repeated misconduct and demanded his replacement.

Djir-Sarai explained that he had great respect for the achievements of the RKI boss in the past two years, but there was a lack of responsible and transparent communication. Wieler can no longer be sure of the FDP’s trust, especially after the questionable reduction of the convalescent status to three months, which was obviously not coordinated with the Federal Ministry of Health. This is also not an isolated case, emphasized the Liberal:

“The RKI cannot casually determine the shortening of the recovery period with the stroke of a pen and without any announcement. This decision has a direct impact on the daily lives of many people. Optimal communication works differently.”

The FDP Secretary General thinks the call by the health ministers of the federal states to return the decision-making authority to parliament about the validity of convalescence and vaccination certificates is correct.

There was massive opposition to this on the same day, especially among the Greens. Bundestag Vice President Katrin Göring-Eckardt wrote on Twitter in the afternoon:

“Lothar Wieler has achieved an incredible amount during the pandemic. His expertise, professionalism, and steadfastness in the face of attacks by enemies of science deserve respect.”

Lothar #Wieler has done an incredible amount during the pandemic. His expertise, professionalism and steadfastness in the face of attacks from enemies of science deserve respect. And I am very grateful for his work, which goes far beyond what is taken for granted @rki_de

The member of the Bundestag Janosch Dahmen (Greens), who is also in charge of driving the law on general corona vaccination from the age of 18, also jumped to the side of the criticized RKI boss and claimed that without Wieler you would be in a much worse position in the pandemic.

Lothar #Wieler deserves respect and thanks for his tireless and professional work during this pandemic. His expertise is invaluable. Without him we would be in a much worse position today. pic.twitter.com/Nlpj4AkSEE

Later in the day, Chancellor Olaf Scholz also supported Wieler. When asked whether the virologist still enjoyed the chancellor’s trust, a government spokeswoman said “yes” on Saturday, like the Tagesspiegel reports.

In the comments and retweets on Twitter, a veritable battle is currently raging between supporters and critics of Wieler.

Meanwhile, with Lithuania, another European country has some of the restrictions on public life justified by the so-called “COVID-19 pandemic”. exposed. In the future, the Corona certificate will not have to be shown in the catering trade or in retail. The new rule went into effect on February 5. Lithuanian Prime Minister Ingrida Šimonytė justified this with a “change in the pandemic situation” in the Baltic country.

Health Minister Arūnas Dulkis added that both vaccinated and unvaccinated people can contract the omicron coronavirus strain. The vaccination card has thus lost its importance in containing the spread of the virus.

Nevertheless, the Ministry of Health asks citizens to continue using masks as the pandemic is not over yet. New trading rules came into effect on February 5. For example, shopping centers must regulate customer access so that the number of visitors does not exceed one person per 15 square meters.

The partial lifting of corona restrictions and the privilege of vaccinated people is also reported from Georgia. All cultural, gastronomic and commercial facilities can in future be visited by both the vaccinated and the unvaccinated, writes Echo Kawkasa, a local branch of US-funded Radio Liberty/Radio Free Europe.