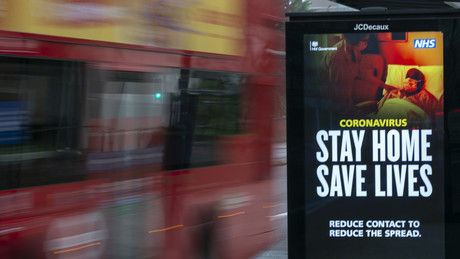 In Great Britain, psychologists criticize that the British government has used “unethical” scaremongering to enforce the corona measures. These tactics were similar to those used in “totalitarian regimes”. MPs now want to investigate the behavior of the responsible officials.

In order to justify the drastic government measures at the beginning of the Corona crisis, the government in Germany primarily used shock scenarios that were intended to “clarify the concrete effects of an infection on human society”. This is what the Interior Ministry’s COVID strategy paper under the then Interior Minister Horst Seehofer (CSU) said:

“Many seriously ill people are taken to the hospital by their relatives, but are turned away and die at home in agony, struggling for breath. Choking or not getting enough air is a primal fear for everyone. The situation in which there is nothing you can do to endanger your life to help floating relatives, also…”

Not only in Germany, but also in Great Britain, the government relied on horror scenarios to help the corona measures to be enforced. Numerous psychologists have now criticized the government for unethical scaremongering and using tactics similar to those used by China to urge the frightened public to follow the corona rules. In addition, members of the British Parliament want to investigate the behavior of the officials responsible for the COVID campaigns. They fear that “grossly unethical” tactics were used.

In this context, 40 psychologists co-signed a letter to Parliament’s Public Administration and Constitutional Affairs Committee, condemning the UK government’s morally questionable commercials with slogans such as “Stay at home to save lives” or “If you go out and spread the word , people will die”. The group, led by retired clinical psychologist Gary Sidley, also criticized the use of television images showing “acutely ill people in intensive care units” and the “macabre mono-focusing on the number of COVID-19 deaths with no mention of mortality from others Causes”.

The psychologists also pointed to a government memo circulated in March 2020 which suggested that “senses of personal threat must be increased among those who are complacent”. The memo went on to say:

“Shame and scapegoating have encouraged some people to harass those who cannot or do not want to wear a face covering.”

But even more troubling, according to the psychologists, the fears that have been propagated have contributed significantly to many thousands of deaths that are not attributable to COVID but to the fact that the strategically fomented fears have discouraged many people from seeking help for other illnesses search.

The group also explained that the actions of some “government scientists” who use fear to sway public opinion resembled in some ways “totalitarian regimes” that seek to eradicate popular beliefs and behaviors that deviate from government line . Parliament’s Public Administration and Constitutional Affairs Committee is now set to investigate the government’s use of scary commercials during the coronavirus crisis. William Wragg, the committee’s chairman, told the Telegraph newspaper:

“The key question is how ‘Nudge’ fits into parliamentary democracy and ministerial accountability.”

Sidley and the other signers of the letter also credited the involvement of the Behavioral Insights Team (BIT) for the tactic. The BIT is a UK-based but global non-profit organization that conducts behavioral research based on the nudge theory with the aim of influencing public thinking and decision-making in order to improve compliance with government policies . The organization was founded by the British government, but is now partially private. The BIT claims not to have been involved in the Corona commercials and rejects the use of fear in campaigns.

Earlier this month, the group’s co-founder, behavioral scientist Simon Ruda, accused the “Nudge Unit,” as the BIT is also known, of placing too much importance on propagandistic models and data:

“This fear subsequently appears to have driven policy decisions in a worrying feedback loop,” said Ruda, who co-founded the Behavioral Insights team in 2010.

According to Ruda, the level of fear readily conveyed to the public was one of the most far-reaching and extensive mistakes made in response to the pandemic.

He also criticized the UK government for relying too much on the COVID worst-case scenarios drawn up by its advisers. The government had used forecasts with an enormous number of corona cases and deaths to justify drastic measures and to urge people to comply with the corona rules, according to the accusation. One of the government’s lead modellers recently explained that the committee did not consider optimistic scenarios because “no decisions could be made with them”. Referring to the government’s frequent call to follow “the science” during the Corona crisis, Ruda said:

“As we’ve learned over the past two years, focusing on ‘the science’ is narrow-minded…”

More on the subject – Leak: Four days of fear – How the COVID strategy paper came about