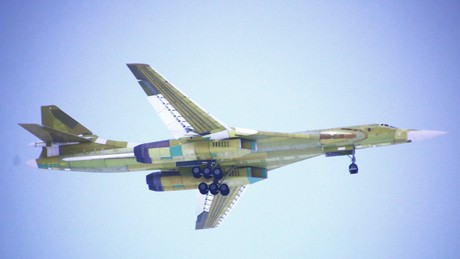 After the end of the Soviet Union, no new strategic bombers were built in Russia. In 2015 it was decided to develop a new aircraft based on the Tu-160: the Tu-160M. The first copies were originally supposed to be handed over in 2023. Now the first has already completed its maiden flight.

At the end of the second half of 2022, the Russian Ministry of Defense will receive the first completely newly built Tu-160M ​​strategic bomber for tests in practical use. The handover of the aircraft ordered in 2015 was originally planned for 2023.

The Tu-160M ​​will be the successor to the Tu-160, one of the last Soviet aircraft planned since the 1970s, produced from 1981 and entering service from 1987. Of the total of 36 Tu-160s produced, 15 are still owned by the Russian Federation Armed Forces – most of them have now been modernized to the Tu-160M. After the location of the Tu-160 in the Soviet Union was the Ukrainian Priluki, ten of the machines were scrapped there and only eight were transferred to Russia in 2000 to settle gas debts. Since then, the Tu-160 have been based in the city of Engels. The Soviet bomber finally flew its first combat missions in Syria.

The Tu-160M, which is due to be handed over soon, is a completely new construction. For this, the complete production process only had to be reconstructed after the last Tu-160 had been produced decades ago. The aircraft received new engines, modern navigation and innovative weapon guidance systems, which are now compatible with the latest missile systems. To statement According to the director of the Russian aviation consortium OAK, Yuri Slyusar, 80 percent of the plane is new and only 20 percent is identical to the Tu-160. The entire aviation industry of Russia is brought together in the OAK. This includes the plant in Kazan, which builds the Tu-160M.

The Tu-160 (nicknamed “White Swan”) with its four engines reached a speed of 1,030 km/h at ground level and 2,220 km/h at optimal altitude. She could carry a load of 45 tons. As recently as September 2020, two Tu-160s set a world record for aircraft of this class, with an uninterrupted flight time of more than 25 hours and a distance covered of over 20,000 kilometers. The Tu-160M ​​will at least meet these values. The first new bomber made its maiden flight on January 12th.

According to the contract, a total of 50 Tu-160M ​​are to be delivered to the Russian Air Force by 2035. At the same time, the development of another strategic bomber continues: The PAK DA is said to have “stealth” qualities in contrast to the Tu-160M.

The liberal Russian press criticized the acquisition of the Tu-160M ​​as useless. The plane could not approach a possible opponent undetected far enough, it said. However, the critics ignored both the new systems of the Tu-160M ​​and the technology of the hypersonic missiles. after one report from RIA Novosti, the Tu-160M ​​is also equipped with both a rear radar and rear-firing missiles. This, in turn, should address the Tu-160’s known weakness of being blind to fighters attacking from behind.

More on the subject – Would NATO arms supplies be enough to defend Ukraine in the event of war?