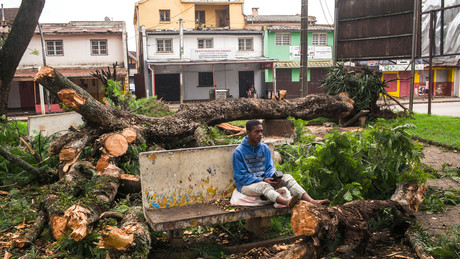 The island nation of Madagascar was hit by a severe tropical storm. According to the authorities, at least ten people died. 40,000 islanders were taken to emergency shelters. International aid has started. Also present: the THW.

Tropical cyclone Batsirai has killed at least ten people and caused severe damage on the island of Madagascar off the East African coast. As the authorities announced in the evening, “Batsirai” had hit the east and south of the island in particular on Sunday night. Numerous houses were destroyed, power poles and trees snapped. Severe flooding is also feared.

Around 40,000 islanders had spent the night in emergency shelters in the affected region. Aid organizations fear lasting damage, as the people there are still suffering from the devastating damage of a previous hurricane.

The Federal Agency for Technical Relief (THW) responded to an international request for assistance from Madagascar and sent first aid workers. At the request of the Federal Foreign Office, the Federal Ministry of the Interior gave THW the order to send a five-person advance team, the organization said in a statement in the evening. “Our team helps to determine specific needs and to structure the processes,” said THW President Gerd Friedsam.

According to the weather service, “Batsirai” reached the island in the north of the Mananjary region late on Saturday evening with an average wind speed of 165 kilometers per hour and then weakened to around half by Sunday morning. The tropical storm came from the island of Mauritius, where at least one person died, according to the UN Emergency Relief Office (OCHA).

Southern Africa is currently in the summer cyclone season which can bring heavy storms and precipitation through March or April. Just over a week ago, tropical storm Ana devastated Madagascar, Mozambique, Malawi, Zimbabwe and Zambia. Many buildings – including schools – and fields were destroyed, and many people have been homeless since then.

More on the subject – Famine in Madagascar: Soon 500,000 people threatened