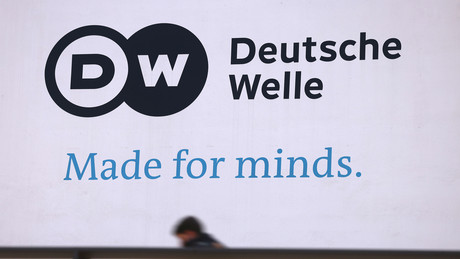 Deutsche Welle, as the entire German mainstream emphasizes, cannot be compared at all with RT DE. After all, Deutsche Welle delivers “balanced journalism that allows both sides to have their say,” according to director Limbourg in 2015 interview with time.

Let’s look at a current product of Deutsche Welle, the video post “Ukraine: Schools prepare children for attacks.” It is from February 5th of this year. The video shows a school in Kiev, where children are presented with all kinds of projectiles and mines.

“Bombs, firearms, ammunition. This is not a military facility, but a school. Mine warning training for the children of school number 259 in the Ukrainian capital of Kiev.”

In reports on the Cuban Missile Crisis, one can read that US students practiced taking cover under the school desks in the event of a nuclear war. It was a useless exercise, but a contribution to the propaganda. This lesson in Kiev, in reality a media staging, should at least be perceived as an act of propaganda, by an independent journalist.

“Children are taught that explosives can come in all shapes and sizes. ‘It looks like an ordinary stuffed animal. But it contains explosives. And every touch, whether you pick it up, brush it or just walk past it, may cause an explosion.'”

There is no evidence that such means were ever used by the Donbass militias or by the Russian army. The use of this cuddly toy as a supposed mine also belongs to the area of ​​war propaganda; however, the Deutsche Welle report does not go into this detail and leaves the viewer with the belief that such weapons are actually used by the militias.

In between, a teacher is quoted who is said to have lived in Donbass in 2014 and reports that her school was shot at by the “separatists” at the time. This can neither be confirmed nor disproved without specifying the location; The fact is, however, that schoolchildren in Gorlowka still regularly have to flee to the basement because they are being shot at by the Ukrainian army. It is also a fact that the civil war in Donbass continues only because the Minsk agreements of 2015 have not yet been implemented by the Ukrainian side. An agreement that Germany has guaranteed; which should at least be worth mentioning to Deutsche Welle.

Quite coincidentally, the evacuation of the school is then practiced. Because, according to the rapporteur, there have recently been bomb threats against schools. By whom? He says nothing about that; but he is just suggesting that they must be pro-Russian forces. He questions the school children, who are naturally impressed by the performance, and concludes with “Everyone hopes that the children don’t have to use what they know. But they should be prepared for anything.”

The whole assertion of a Russian deployment is not questioned. The Ukrainian deployment on the Donbass front is not mentioned. There is no mention of the disregard of the Minsk agreements by this deployment, the deployment of NATO military advisers, the movement of heavy artillery to the front line. Any piece of information that could create distance from the Kiev version of the conflict is omitted. Worse, the Kiev version will be adopted in its entirety. Where, please, do you find “both sides” in this report?

The rest of the reporting is no better. By doing article “Chancellor Scholz Travels to Washington,” which deals with his upcoming trip, the “two sides” featured in it are NATO-loyal Scholz and even more-NATO-loyal critics who want Germany to supply arms to Ukraine.

“In Germany, critics on social media have made derogatory remarks about Scholz’s apparent reluctance to make explicit statements about the Ukraine crisis.”

There is a lot on social media. Certainly also comments that want peace with Russia. However, DW does not quote such; but “critics” who want “clear statements” from Scholz. No, the deterrent example is Gerhard Schröder, who “didn’t exactly help” Scholz because he accused Ukraine of “saber rattling” and associated Russian troop movements with NATO maneuvers.

Scholz, as this description implies, must distance himself clearly from Schröder and finally make the (untruthful) assertion that there are no preparations for an attack on the Ukrainian side.

The approval of economic suicide, which Chancellor Olaf Scholz delivered with his promise not to put Nord Stream 2 into operation in the event of a conflict, is praised. And a US voice concludes that the fact that “Olaf Scholz has to deal with a small minority in his party that is more pro-Russian than some of us would like” makes him a more credible interlocutor vis-à-vis Russia.

Or the article “Is Germany sending more soldiers to Lithuania?” What were German soldiers actually doing in Lithuania anyway? That should be a defensive army, at least that’s what the Basic Law claims. The text welcomes further reinforcement…

This text devotes two whole paragraphs to the fantasies of the Russian invasion of Ukraine. What’s more, in all seriousness it says: “Currently, the Russian military has already deployed around 70 percent of the forces that experts believe would be necessary for a complete occupation of Ukraine.” Does anyone in Deutsche Welle even look at the Russian press anymore? Or use your own wits, even if a claim comes from the US State Department?

No one who can put two and two together would want to occupy Ukraine. Every Russian comment I know comes to the same conclusion: the West has ruined Ukraine, the West should foot the bill. The country is a black hole, all money sent there goes to corruption. If you put Ukraine out for tender, Russia wouldn’t even bid. But this view is not known in Germany. And Deutsche Welle, which claims to deliver “balanced journalism” that “allows both sides to have their say,” is not willing to divulge this small detail.

And the last sentence? That concludes the fantasies of the Russian invasion, after the “second half of February” had previously been forecast. “By then, the ground in Ukraine would have been hardened by frost,” the New York Times claims.

As I said, whatever comes from NATO sources is accepted without any criticism. But while it may be true of American Abrams tanks, they can’t handle muddy ground; but what sense would that make for Russians? Even for purely defensive purposes, they must function in any weather that can be found in Russia, otherwise they would be useless. And they do, in the dead of winter as well as in the height of summer, and they ride on mud too. The only reason the New York Times is once again putting forward a date before which the US-announced Russian invasion cannot take place is that several announced invasion dates have already passed. So that this is not too noticeable, the frost has to be used.

If you want to know how real journalists react to such claims, you can watch Matt Lee at the State Department press conference. First and foremost, this means not swallowing everything that your own government proposes. To demand evidence and not to be fobbed off with allegations. Like “unnamed senior US government officials”. Or anonymous “experts”. Let alone giving such a wide scope to the fantasies developed on these foundations.

The use of such tricks, this evidence-free secret service murmur, is a core part of Western propaganda. It is the casual use of such claims that pushes the boundaries of journalism. Just like the depiction of the Kiev school lesson does. And the report on Olaf Scholz. And that was just a little walk over the Deutsche Welle site.

More on the subject – Tried and tested US method: fomenting war in the Ukraine crisis with fake images