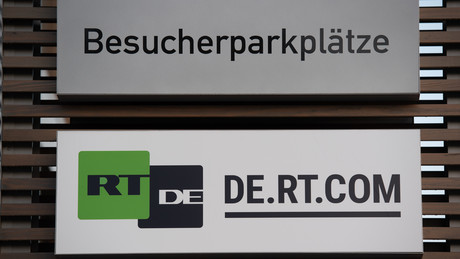 An analysis by Christian Harde

After the “Medienanstalt Berlin-Brandenburg” (MABB; the institution’s own spelling is “mabb”) initiated “formal proceedings” against RT DE Productions on December 17, 2021, it informed RT DE of its decision on February 2, 2022 . This decision was based on a decision by the “Commission for the Licensing and Supervision of Media Authorities” (ZAK) from the previous day, i.e. February 1st.

In the meantime – still on December 31, 2021 – a private individual had contacted the MABB with a request for the Brandenburg File Inspection and Information Access Act (AIG) and the Consumer Information Act (VIG). The applicant wanted to know the reason for the MABB’s decision to force the Eutelsat satellite service on December 22, 2022 to stop broadcasting the new German-language TV channel RT DE via the Eutelsat 9B platform.

The media authority’s answer is now via the FragDenStaat portal accessible become. The Anti-Spiegel portal also drew attention to this did.

Also on February 2, the MABB replied to the applicant and rejected his request for information. After all, she has not charged any fees and expenses for it.

The authority explains the reasons for the rejection on two pages. In doing so, she has, intentionally or not, given revealing clues.

First of all, the authority informs the applicant that he cannot refer to the laws he has cited, i.e. the AIG and VIG already mentioned, for his request for information. But the institution didn’t want to be that harsh after all – and interpreted the request in favor of the applicant according to the Berlin Information Freedom Act (IFG Bln), which obviously applies in this case.

The MABB now claims that the document “requested” by the applicant, i.e. the reason given by the MABB for the shutdown of the Eutelsat 9B satellite service for RT DE, does not exist at all.

She had forced the Eutelsat satellite service “neither on December 22, 2021 nor on any other day” to switch off the transmission of RT DE. She explained this in beautiful official German and strictly logically, albeit reminiscent of Kafka:

Nevertheless, on December 22, RT DE was suspended from broadcasting via Eutelsat locked out.

So far – so good, one would like to assume.

But after this cumbersome derivation, the media authority Berlin-Brandenburg lets the cat out of the bag and rewards everyone who has stuck it out up to this point.

Because at this point, the MABB rejects the inspection of files according to the Berlin IFG. The reasoning for this has it all and sounds astonishing:

“According to this, access to the files may be denied if disclosure of the content of the files would cause serious disadvantages to the welfare of the federal government.”

Although the IFG Bln does not regulate “which concerns are for the good of the federal government”, they are still part of it

“Opinion of the Administrative Court of Berlin … ‘Impairments and threats to the existence and the functionality of the state and its essential institutions, in particular impairments of internal and external security’.”

Not surprisingly, the existence and functioning of the state included the international relations of the Federal Republic of Germany. This is how it is regulated in the IFG Bund (“§ 3 No. 1 lit. a”). Of course, this also includes the relations between the Federal Republic of Germany and another, i.e. foreign state. So if access to files was denied for this reason, then only to

“not to burden the relations of the Federal Republic of Germany with other subjects of international law.”

According to the Berlin IFG, there is a “disadvantage” in these relationships

If such a derivation is offered in order to refuse a simple request for information on the proceedings against RT DE, something seems to be at stake. At the same time, the MABB shows that this is not an ordinary procedure. But after these very fundamental considerations, it becomes even clearer:

“It is likely that publication of the content of the case file would lead to serious diplomatic tensions between the Federal Republic of Germany and Russia. This is supported by the fact that dealing with the television station ‘RT DE’ was already a detailed topic at the joint press conference by Foreign Minister Baerbock and her Colleague Lavrov during Foreign Minister Baerbock’s inaugural visit to Russia.”

Foreign Minister Lavrov criticized “the actions of the Federal Republic of Germany” (!) against RT DE on this occasion. The MABB was aware of the countermeasures promised by the Russian side,

“should there be any intervention against ‘RT DE'”,

so conscious. This is evident in the following admission:

Considerations for Berlin interests in the Ukraine crisis

The MABB continues to be extremely sensitive in terms of foreign policy and refers to the current tensions between Western countries and Russia in the so-called Ukraine crisis. The Federal Republic is making “attempts to mediate” in the tense situation, and disclosure of the MABB case file could impair these efforts:

“It is obvious that the current Franco-German mediation efforts require the highest level of political and diplomatic sensitivity.”

The MABB states that the final barriers to publication of the file are that the administrative procedure has not yet been completed and “draft decisions may not be transmitted”. And should this argument not suffice, the MABB pushes the last internal bolt, which should apply in every procedure:

“In addition, the entire content of the files allows for in-depth conclusions about the protected decision-making process of the Berlin-Brandenburg Media Authority.”

It could hardly be demonstrated and admitted more clearly how aware the “Berlin-Brandenburg Media Authority” is of the international dimension and the politically sensitive side of the allegedly non-state and government-related proceedings against RT DE.

With this type of wording & content, does anyone believe that the answer of the “independent” media authority @mabb_de without consulting @Ministry of Foreign Affair was written? E.g.: “If the contents of the file became known, this would cause serious disadvantages to the welfare of the Confederation”: pic.twitter.com/SuFUoK9yd0

In view of the German-Russian dispute over broadcasting licenses for the respective foreign broadcasters, these admissions of consideration for federal politics on the part of a state media authority seem piquant in a further respect. Because at the “Federal Agency for Civic Education” (bpb), a subordinate federal authority in the portfolio of the Federal Ministry of the Interior, the quasi-official position of the government on foreign broadcasters such as the state-financed Deutsche Welle can be seen read:

“The history of Germany’s division teaches that the mere existence of broadcasting corporations like Deutsche Welle is a signal both internally and externally – of the claim to want to be present in the world and of the conviction that oneself knows the right way. This Apparently, signal can also cost something.”

It looks as if Berlin only factored in the direct financial, but not the political, cost of this claim.

More on the subject – Russian Foreign Ministry: US, Germany, France and UK declare war on RT