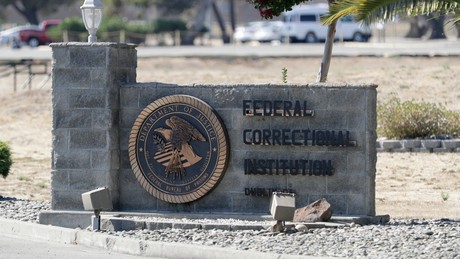 In a women’s prison in the US state of California, employees are said to have systematically raped inmates. According to media reports, the prison authorities not only covered up the attacks, but even tolerated them.

The federal penitentiary in Dublin, California, is said to have allowed and covered up sex abuse by staff members. This comes from one report the Associated Press on Sunday, citing internal testimonies from inmates and former employees at the US Department of Corrections describing abuse cases.

According to the documents, allegations of abuse against guards were ignored. Some prisoners who reported wrongdoing were sentenced to solitary confinement.

The prison warden has been accused of storing nude photos on his cell phone of an inmate he allegedly abused, the investigation said. A guard reportedly admitted trying to get female inmates pregnant. Another prison officer is accused of putting an inmate on a work assignment with an officer whom she accused of raping. When the work was announced, he reportedly said it was time to “let the games begin”.

The culture of abuse in the California prison is so pervasive that numerous inmates and staff have described the process as a “rape club.”

According to the Associated Press, four Dublin prison staff have already been arrested as a result of the allegations after a complaint was referred to the Justice Department and the FBI. Among those arrested located former warden Ray J. Garcia also commented. The US Department of Prisons is still investigating a majority of the more than 400 complaints of staff sexual assault against inmates made in 2020 – the year in which a number of complaints were reported at Dublin prison.

The Dublin Federal Penitentiary was converted into a women-only prison in 2012 and currently houses around 750 inmates. Recent inmates included celebrity actresses Lori Loughlin and Felicity Huffman, both convicted of fraud related to a college admissions scandal.

A new director will take over the Dublin facility later this month. Thahesha Jusino has pledged a zero-tolerance policy on sexual abuse. She explained:

“A culture of misconduct or actions inconsistent with the Prison Authority’s core values ​​will not be tolerated.”