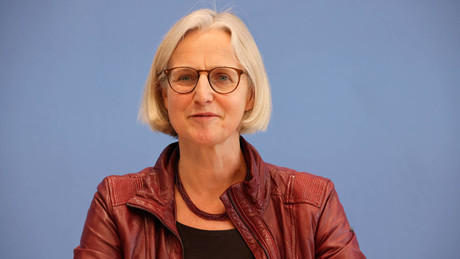 There are moments that make you shiver because you suspect that bad things are about to follow. The silence of the Western media after the Odessa massacre, for example. It made it clear that the Kiev troops would have a completely free hand in Donbass, allowing them to commit any crime. And that’s how it happened: hospitals and schools were bombed, water and power supplies were destroyed, entire columns of cars carrying people fleeing to the Russian border were shot at with rockets; countless war crimes that had never even been noticed in the West. Just like Odessa.

Today I had that feeling again. And the trigger was watching the federal press conference. To be precise, the answers from government spokeswoman Christiane Hoffmann. She was asked by our colleague Florian Warweg what the attitude of the federal government would be if the Ukrainian troops attacked the Donbass republics. And she didn’t say anything about Minsk II and that it would break that; Nor did she say anything to the effect that one wished that it would not come to that, or that one had to find a way out that both sides could feel safe with. No, she said: “Donbass belongs to Ukraine. That’s my answer to your question.”

The absurdity of talking, a few minutes apart, on the one hand of Russian aggression because Russian troops are on Russian territory without firing at anyone, and on the other hand succinctly declaring that this would be Ukrainian territory even in the event of a Ukrainian attack, seemed absurd not to cause her any problems. That’s what we’re used to from government spokesmen. The tape with the “Russian aggression” has been running in an endless loop since 2014, you’ve gotten used to it like street noise. But this casual swiping away of the people in Donbass, who in 2014/15 actually had to deal with a repeat of the war of annihilation because Kiev is only interested in the area, not in the residents, and who would be threatened with the same thing again, this succinct denial that there People live, who breathe, live, bleed and suffer like us – that made me freeze.

I admit there were two other pieces of information that contributed because they point in the same direction. The first was the claim made by the US State Department that Russia was planning a false flag operation involving a mock massacre. At first I thought that was just nonsensical. After all, it is the US, not Russia, that has a long history of fake attacks (and, yes, we Germans too). And it was fun watching Matt Lee dissect that claim. But then came the second piece of information: a number of video channels from the Donbass republics were blocked on YouTube. And that’s when the first piece of information fell into place, like a piece of a jigsaw puzzle.

What if this US statement is not intended to accuse the Russians of producing false videos, but rather to preemptively cast doubt on the authenticity of very real recordings of real events of a Ukrainian attack? In this context, the closure of YouTube channels makes sense. Not because there are no other ways to distribute videos. But videos are one thing, live streams are another. The air raid on Lugansk on June 2, 2014, for example, was broadcast live. And while faking videos is no longer a problem, it’s more difficult with live streams. What if the purpose of blocking the video channels is to make that very piece of evidence, which remains undeniable, impossible? And the US claim is an anticipatory defense of Kiev troops against allegations of premeditated massacres?

Well, such a collision of different pieces of information, which together suddenly make a different sense, is acknowledged and initially posted under “hypothesis”. A possible but not yet mandatory reading. And then came Mrs. Hoffmann.

The scenario that is unfolding is bad enough. Minsk II is clearly disappearing. The dpa wrote today: “A peace plan that was agreed in 2015 with the participation of Germany and France in the Belarusian capital Minsk is on hold.” Just to remember that there was something there. Annalena Baerbock’s statements in Kiev, in which she referred to the Normandy format, also give no reason for hope. Finally, her Ukrainian colleague, as Kiev’s second “red line” as he called it, said unchallenged: “No direct dialogue, that’s not foreseen by the Minsk agreements.” Yes, he probably is, which is something both Baerbock and its Ukrainian counterpart need to know if they’re literate. But on this point, Ukraine and the federal government have been lying for years.

That Baerbock proudly announced in Kiev in relation to new sanctions against Russia: “Yes, we are also willing to pay a high economic price for this, because the security of Ukraine is at stake” and declared that “we” would “still have our support once again increase” – of course, one distances oneself internally, in the sense of “Freezing for Bandera? Without me!”, and suppresses the performance as quickly as possible.

That the way the German government is dealing with Minsk II will ensure that this country can no longer be taken seriously as a negotiating partner because it disregards treaties that it negotiated itself? As you make your bed, so you lie; if things went normally, the price would still be visible.

If it weren’t for Mrs. Hoffmann. Not that I’m very worried about the Donbass. I trust the Russian assurance that the Donbass republics will not be wiped out. There will be no massacres, which the State Department, as a precaution, has already denied. And the strange sideways maneuvers that have been observed in Kiev in recent weeks indicate that these gentlemen also know how such an adventure would turn out, and that at some point the Ukrainian population could be enough to serve as cannon fodder in foreign geopolitical interests .

It is the coldness, untouched by any doubt, with which Ms. Hoffmann treated a Ukrainian breach of the Minsk agreements almost as a fait accompli, completely unaware of the thousandfold misery, which is intended to serve no other purpose than to finally force Russia to act, which is so terrifying. The indifference even to the diplomatic prestige of this country. From the mouth of a spokeswoman for a German government who should at least have some knowledge of the history of the region. It seemed as if the decision had been made, as if war was wanted at all costs.

Sometimes those feelings are deceptive, and in this case I hope they are. But all the events of the last few weeks taken together, both economic and political, including the attack on the RT DE television station, indicate that the West, including the federal government, would rather put all its eggs in one basket than accept its decline. And that can really make you cold.

More on the subject – How the federal government and parliament talk about Ukraine, but remain silent about the Minsk agreements