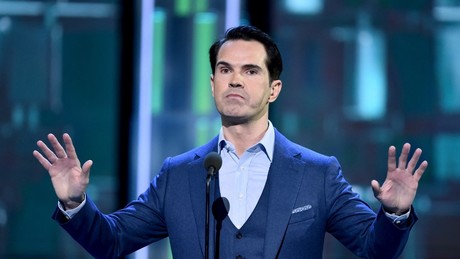 The British comedian Jimmy Carr, who is considered to be extremely provocative, has now probably taken it too far. In a “joke” Carr amused himself about Sinti and Roma who were also killed in the Holocaust – even Boris Johnson’s spokesman then spoke up.

A joke by the highly provocative comedian Jimmy Carr on his Netflix show His Dark Material (not to be confused with BBC series His Dark Materials) has caused a stir in the UK. Carr’s comments about Sinti and Roma are “deeply disturbing,” said British Prime Minister Boris Johnson’s spokesman. When asked if the broadcaster should remove Carr, the Downing Street announcer declined to answer. The spokesman stated:

“These comments are deeply disturbing – and it is unacceptable to downplay genocide.”

In his joke, Carr first spoke of the horrors of the Holocaust. “Six million Jewish lives lost,” Carr said, before going on to say that nobody is talking about thousands of dead Gypsies because, Carr continues:

“Because nobody ever wants to talk about the positive aspects.”

Carr went on to say he knew the joke was borderline, but it also had “educational value.” Carr continues:

“It’s a joke about the worst thing that has ever happened in human history and people say ‘never forget’, well that’s how I remember it […] There is an educational quality. As everyone in this room knows, six million Jews lost their lives at the hands of the Nazis during World War II. But many people don’t know that the Nazis also murdered thousands of gypsies, homosexuals, disabled people and Jehovah’s Witnesses because that’s not really taught in our schools.”

Despite the explanation as relativization after the joke, he caused outrage on social media and in British politics. This program is not new – it was already broadcast at Christmas 2021. Only an excerpt that was uploaded as a clip to Twitter last week triggered the current shitstorm. Carr had already warned at the beginning of the show:

“Before we start, a quick warning. Today’s show contains jokes about terrible things. Things that may have affected you and the people you love. But those are just jokes. It’s not the terrible things.”

On Saturday, Britain’s Culture, Media and Sport Secretary, Nadine Dorries, who is also responsible for Ofcom, indicated that future legislation could prevent Carr’s comments from being broadcast. Dorries told the BBC that Carr’s comments were “disgusting and simply shouldn’t be shown on TV”.

Carr has also been heavily criticized for his remarks by groups including the Holocaust Memorial Day Trust, the Auschwitz Memorial and Hope Not Hate. Carr himself has not commented on the controversy — at least not directly. Last Saturday he said during his performance in London:

“We are speaking here, my friends, in the last chance saloon [britischer Ausdruck für eine Situation, nach der es nur noch schlechter werden kann, Anm. d. Red.] What I say on stage tonight is hardly acceptable. You can fucking forget it in ten years. You will be able to tell your grandchildren how you saw this show tonight. They’ll say, ‘I saw a man standing on a stage and taking serious issues lightly. We used to call it jokes and people laughed […] I’ll be canceled, that’s the bad news. The good news is I’ll go down with momentum. The joke that will end my career is already out there.”