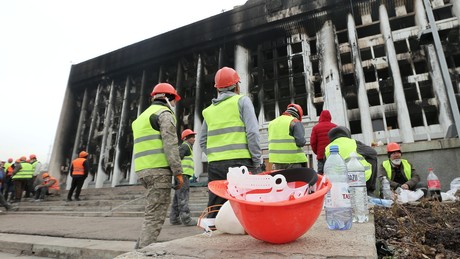 At the beginning of January, after a price increase for natural gas, there were initially peaceful mass protests in the country, which later culminated in violent clashes with the security forces. The government blames provocateurs for this.

Kazakh authorities said on Monday that January’s protests, which escalated into violent clashes, were “used by various forces,” Turkey’s official Anadolu News Agency reported. Prosecutor Rizabek Ojarow, speaking at a press conference on the investigation into the riots, which began as peaceful protests, said the protests, which had swept almost every corner of the country, had been exploited by “several extremist groups” for their own purposes. He said:

“Now we know for sure that the peaceful protests were exploited by various forces.”

According to Oyarov, Kazakhstan was subjected to a “coordinated hybrid attack”. The actions of some actors in the protests are a clear sign of their political extremism. The Attorney General’s Office is currently conducting extensive investigations into the riots.

“There are currently 18 members of organized crime and 35 members of banned extremist movements in custody. Among them is a member of a criminally oriented group of a subversive religious movement.”

The actual goal of the provocateurs active in the protest movement was to take over state power by force of arms. Ojarow also commented on the case of the head of the intelligence service, Karim Mäsimov, who was deposed shortly after the protests broke out:

“Investigations against the former head of the National Security Committee and two of his deputies on suspicion of treason and violent seizure of power continue. We are investigating suspicions that some members of the security forces were monitoring the movements of special forces responsible for maintaining social order, intentionally obstructed.”

467 people are still in detention. They are accused of taking part in riots and terrorist attacks. Random civilians are not in custody. According to the prosecutor, more than 3,000 weapons were stolen during the protests in January. About half of them come from the military arsenal, the other half from civilian arms shops.

“Only half of these weapons were confiscated by the security forces. The rest are still in the hands of unknown persons.”

In January, after a price increase for natural gas was later withdrawn, mass protests and violent clashes shook the country. The Kazakh government asked the Collective Security Treaty Organization (CSTO) for assistance. The peace contingent, consisting of soldiers from Russia, Kyrgyzstan, Armenia and Belarus, stayed in the country for only a few days. Meanwhile, all foreign troops withdrew.

More on the subject – After riots: Kazakhstan authorities correct the number of dead and injured upwards