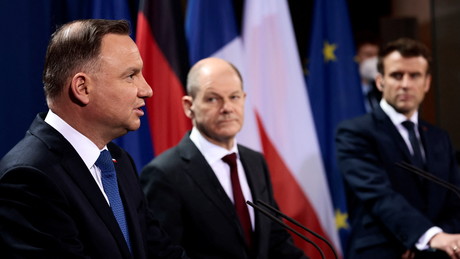 The Weimar format is a meeting of the heads of state or government of France, Poland and Germany that has existed for 30 years. This time the crisis in Ukraine is the focus of the talks.

Federal Chancellor Olaf Scholz emphasized how much he valued the dialogue with European partners and this Weimar format in particular.

“Our common goal is to prevent a war in Europe. The deployment of Russian troops on the border with Ukraine is very worrying, and our assessment of the situation is very much the same.”

He emphasized the need for de-escalation, but also declared that a “further violation of Ukraine’s territorial integrity” would have “far-reaching consequences for Russia”, “politically, economically and certainly also geostrategically”.

Polish President Andrzej Duda said the situation was the most difficult since 1989. “Europe hasn’t seen troop movements like this since World War II.” He also stressed the need to avoid war, but added:

“It is up to us to ensure and protect territorial integrity, including for these countries that are not members of the European Union and are not members of NATO. (…) We must show that we are not taking a step backwards . We will not let anyone down because we are afraid that we cannot achieve peace.”

French President Macron stressed that “in this format we are connecting three major European countries.” He, too, declared that the first task was to avoid war.

“Peace and stability of the European continent is our greatest treasure.”

The next task is to defend the unity of Europeans and their allies and finally the sovereignty of all states, territorial integrity and common values.

He reiterated that the Normandy format is “the political framework for resolving the Ukraine crisis.”