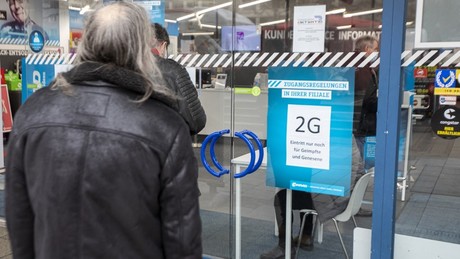 Federal Minister of Health Karl Lauterbach warned on Tuesday against a quick lifting of measures and described the discussion about easing as inappropriate. Some politicians and especially the trade obviously see it differently.

The calls for easing perspectives in the COVID-19 pandemic are getting louder and louder. The leader of the FDP parliamentary group in the Bundestag, Christian Dürr, told Bild on Wednesday that as soon as there was no longer a risk of the health system being overloaded, restrictions would have to be withdrawn. “That’s why we are already talking about concrete opening perspectives.” The next prime ministers’ conference should take the first decisions on this. The German Association of General Practitioners called on the federal government to draw up an opening plan for the exit from the corona measures.

Federal Minister of Health Karl Lauterbach only warned on Tuesday against a quick lifting of measures and described the discussion about easing as inappropriate. “We don’t really have the situation under control yet,” said the SPD politician. A peak in the omicron wave is expected for the middle of this month.

The federal chairman of the German General Practitioners Association, Ulrich Weigeldt, told the editorial network Germany (RND): “Politics must already develop a concept of how the opening steps should look like in concrete terms.” It is essential to avoid that hectically inconsistent and not well thought-out relaxation measures are decided.

The Green politician Dieter Janecek called for minors to be taken into account first when loosening. “Children and young people finally need complete normality again, they should be the first to benefit from openings,” he told the picture on Wednesday. For youth sports and club life, “all restrictions should be lifted promptly”. FDP health expert Christine Aschenberg-Dugnus wants to give children “broad access to educational, sports and cultural facilities”. “This should be done regardless of vaccination status and be implemented first when measures are relaxed.”

“The whole of Germany must become 2G-free”

On the other hand, the education and science union warned against losing sight of the consequences for the schools in the event of possible easing. “Schools are not islands, infections are carried into the facilities and spread here too,” said Maike Finnern, the chairwoman of the Education and Science Union (GEW), the RND. “Relaxing protective measures in other areas of society therefore means accepting that the number of infections in schools will continue to rise – and that more and more facilities will have to close.”

Meanwhile, the German Hospital Society assumes that the clinics are coping well with the omicron wave. “I currently no longer expect the German healthcare system to be overburdened in the coming weeks,” said CEO Gerald Gass of the picture. The current corona measures should apply until the peak of the omicron wave, which the federal government expects in one to two weeks. After that, politicians could “without a doubt envisage gradual easing for the coming weeks”.

Retail in particular is putting pressure on the issue of easing. In some federal states, the 2G regulation has already been overturned. These include Bavaria, Berlin, Schleswig-Holstein, Mecklenburg-Western Pomerania, Hamburg and Bremen. As Bild writes, the founders and bosses of “big names like Deichmann, s.Oliver, KiK, Intersport and Douglas, the bosses of wholesalers like ANWAR and the shopping center giant ECE” are demanding that “all of Germany become 2G-free ” must.

More on the subject – New initiative by the Ministry of Health: Neighbors should step in for nurses