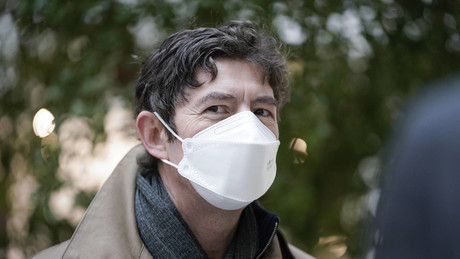 Physicist Roland Wiesendanger has recently accused experts such as Charité virologist Christian Drosten of concealing the origin of SARS-CoV-2. Now Drosten admitted that things were being done in Wuhan “that could be described as dangerous”.

In the debate about a possible laboratory origin of the corona virus, the Charité virologist Christian Drosten has now spoken. In interviews with Cicero and the Neue Zürcher Zeitung last week, the physicist Roland Wiesendanger stated that in his opinion it was likely that SARS-CoV-2 came from the laboratory in Wuhan. Wiesendanger also accused Drosten of having misled and deceived the media world and politicians in this regard. As a participant in a conference call suggested by US Presidential Advisor Anthony Fauci, which convened on February 1, 2020, Drosten is said to have helped obscure a possible laboratory origin of the coronavirus.

In an interview with the Süddeutsche Zeitung, Drosten admitted that “things were done in Wuhan that could be described as dangerous. It really didn’t have to be.” In Drosten’s opinion, however, the SARS-CoV-2 pathogen could not have arisen. With this, Drosten is referring to project reports that have become public, according to which “Gain of Function” experiments were actually carried out in a project of the US Eco Health Alliance, in which new spike proteins are incorporated into bat viruses through genetic engineering.

“It turned out that the viruses constructed in this way could multiply better. It was also revealed that there were plans to incorporate furin cleavage sites, but this was to be done in an American laboratory and the project was not funded,” says Drosten.

However, the SARS-CoV-2 pathogen has a furin cleft that enables the virus to infect airway cells more easily. Theoretically, one could create such a fissure in the laboratory, but such furin fissures would also constantly arise in nature. In its own preprint study, his working group at the Charité found specimens of viruses related to SARS-CoV-2 in samples from bats, “in which only one mutation would be necessary, and then these viruses would also have a furin cleavage site similar to that of Sars -CoV-2″. He therefore assumes that this can also occur in nature. However, the study, which according to Drosten was published as a preprint because no experts could be found for it, was torn up by the experts. Jesse Bloom from the Fred Hutchinson Cancer Research Center in Seattle described the preliminary study as not particularly meaningful:

“I am skeptical of the various hypotheses about how furin cleavage sites form, but the part of this paper that suggests that furin cleavage sites may be present as minor variants in two of these SARSr-CoVs is embarrassingly bad science that is not shared more widely should be.”

I’m agnostic on its various hypotheses about mechanisms of origin of furin-cleavage sites, but the part of this paper that suggests furin-cleavage site might be present in two of these SARSr-CoVs as a minor variant is embarrassingly bad science that shouldn ‘t be amplified. (1/n) https://t.co/dkyu79ntRI

Nevertheless, Drosten still considers it likely that the corona virus is of natural origin and originated, for example, on the market in Wuhan, since animals such as martens or civets, which could be considered intermediate hosts, were also sold there. Referring to Wiesdanger’s cover-up allegations, he said there was no evidence:

“You can see in all of my public statements that I’ve always been open to both possibilities. I just always said that’s why I think a natural origin of the virus from the animal kingdom is more likely for verifiable reasons.”

In the interview, Drosten also criticized the fact that his colleagues had not informed the public about the test taking place in Wuhan at an early stage:

“Above all, some people in the USA knew about these experiments. Right from the start, when these public allegations came up, one should have communicated aggressively and proactively what was being done in the laboratory there. Many scientists, including myself, were in The Lancet put their hand in the fire for the colleagues from Wuhan, but were not informed about these projects. If I had known about this, I would have at least had questions before signing.”

Drosten said that final certainty about the origin of SARS-CoV-2 will only be available if China also cooperates in the investigation. He is surprised that there are no scientific publications with reviews on this. Research into virus diversity is actually one of China’s strengths, but “nothing is added” to SARS-CoV-2.

“But if you keep coming up with some unqualified, sometimes outrageous allegations, I can’t imagine that you’re securing the cooperation of our colleagues there.”

More on the subject – The Wuhan suspicion: Drosten is said to have “misled the entire media world and politics”.