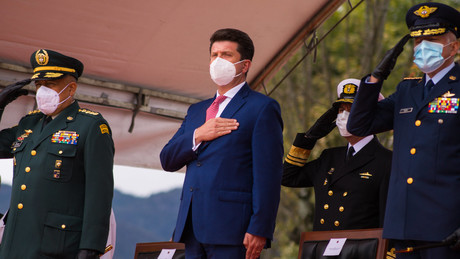 The embassy of the Russian Federation in Colombia last Friday denied previous allegations by the Colombian defense minister that Russia, together with Iran and Venezuela, is preparing a military intervention on the Colombian border.

Colombian Defense Minister Diego Molano has accused Russia of interfering in Colombia’s internal affairs. In the course of an intelligence reconnaissance mission into ongoing fighting on the Venezuelan border, the Colombian Ministry of Defense found that the Bolivarian Republic of Venezuela, with the support of Russia and Iran, was mobilizing troops and weapons in the areas bordering Colombia.

Molano assured during a press conference last week that Venezuela’s armed forces, Fuerza Militar Bolivariana (FANB), had moved “men and units” to the Colombian border with technical assistance from Russia and Iran. He went on to say that the guerrilla war in Colombia’s Department of Arauca “didn’t start in Arauca, but on the other side of the border.” In doing so, he indicated that the clashes there were caused by the intervention of foreign forces “to remove the FARC’s dissidents.”

Various clashes have been taking place in the area for years between the interest groups of the “ELN guerrilla” and the allied “Nueva Marquetalia” and the “FARC dissidents”.

However, grassroots organizations based in Arauca disagree with the defense minister’s statements. Rather, what is at stake in the region is a war of narco-paramilitary structures against the social movement in Colombia. FARC dissidents, who are suspected of being under the influence of the Colombian state, are said to be behind the structures.

Meanwhile, Russia’s diplomatic mission in Colombia has strenuously rejected the allegations made by Molano. In a report on the official website, the Mission announced that the Embassy of the Russian Federation in the Republic of Colombia is “perplexed” by the constant attempts to accuse Russia of alleged “interference in Colombia’s internal affairs”:

“Unfortunately, Secretary of Defense Diego Molano, who on February 3, 2001, in his tireless search for fictitious enemies, citing unconfirmed ‘intelligence data’, spoke of a ‘foreign intervention’ on the border with the neighboring state, allegedly with support and technical assistance from Russia, among others, is also ‘outstanding’ in this respect.”

At the same time, the Russian embassy highlighted the conversation between the Russian ambassador and Colombian Foreign Minister Martha Lucía Ramírez, which was held on “good terms”:

“These irresponsible statements by the cabinet member seem even more inappropriate given President Iván Duque’s meeting with the heads of accredited diplomatic missions that took place on the same day. During this meeting, the Colombian President advocated the development of friendly relations between Bogotá and the outside world and in a short conversation with the Russian Ambassador, together with Vice President and Foreign Minister Marta Lucía Ramírez, pleaded for the expansion of cooperation, also in connection with the upcoming departure of the newly appointed Colombian Ambassador in Russia to Moscow.”

According to the news magazine Infobae, Molona is now under heavy criticism for his unproven allegations against Russia. The statements he made against Russia “could pose a threat to the country from a diplomatic point of view,” the statement said report from last Friday:

“It is not the first time Molano has made false claims as defense chief, and now on a new occasion he has made remarks that are dismissed by a powerful country like Russia.”

Molano had already done so in the past unproven allegations voiced against Russia. In the wake of the so-called “social explosion” protests last spring, Molano accused Russia of being responsible for the cyber attacks against the armed forces. The website of the Colombian Armed Forces could not be accessed during the first weeks of the protests. At that time, too, the Russian embassy accused the defense minister of making untenable allegations.

A few months later, it emerged that the Colombian military had staged the cyberattack to improve the Ministry of Defense’s image, which had been badly damaged by previous unrest. For this purpose, the IT company Alotrópoico SAS was commissioned for the equivalent of around 200,000 euros, the explained Colombian Foundation for Freedom of the Press (Fundación para la Libertad de Prensa).