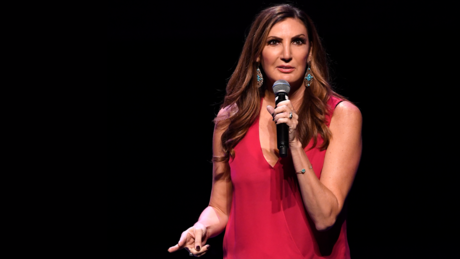 US comedian Heather McDonald collapses during a show. The result is a fractured skull. Spicy: She falls to the ground right after making jokes about the unvaccinated and unboosted. And the audience applauds, assuming it’s a show.

Is that called bad karma? Like the US portal TMZ reported, comedian Heather McDonald performed her comedy program Monday during a sold-out event in the city of Tempe, Arizona. Right at the beginning of her performance she said:

“I’m vaccinated, double-vaccinated, boosted … with the flu shot and the shingles shot, and didn’t get COVID, and Jesus loves me the most.”

With these words, she targeted the not exactly small group of unvaccinated/not “boosted” people in the USA. But then the shock moment followed: As video recordings show, the 51-year-old suddenly collapsed and hit the back of his head violently on the ground.

Stand up comedian Heather McDonald made a joke about having 3 experimental covid jabs plus more and how they haven’t harmed her. She then collapses on stage, fracturing her skull as she hits the floor. pic.twitter.com/cZkrqm5gKN

The audience applauded enthusiastically, assuming this was part of the show. As it turned out, though, the comedian was still conscious. After an 911 call was made, she was taken to a hospital by ambulance. She is said to have later explained to TMZ that she suddenly became dizzy. She suffered a fractured skull as a result of the violent fall. The exact cause of their collapse is still unclear.

More on the subject – US study: Myocarditis rate increased after mRNA vaccination in women too