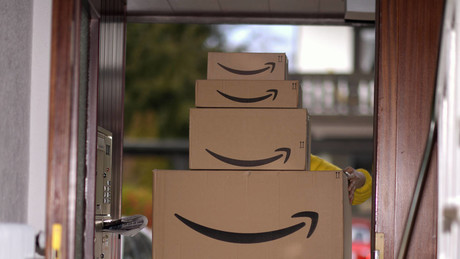 The US company Amazon, worth billions, has been under criticism for a long time, not only because the company tramples on workers’ rights worldwide, but also because it avoids taxes despite record sales. Amazon, “the $1.4 trillion tech juggernaut and notorious tax dodger,” is aggressively grabbing taxpayers’ money, not just consumers’ money, according to a report by UNI Global Union, a global union federation, and Good Jobs First is called.

At least $600 million in tax breaks granted to the online giant in other countries include $15.6 million for Amazon’s Leipzig warehouse. According to the report, it is conceivable that additional warehouses may have received subsidies prior to the introduction of transparency rules that will apply in the EU from June 2016. This is the case in all the richer states of the EU.

In Scotland, France, Spain, Canada and Brazil, too, the US group was able to rely on tax breaks in the millions for warehouses, call centers and data centers. According to the authors of report titled “Amazon.com’s Hidden Worldwide Subsidies,” this is just the tip of the iceberg. In addition, there are 407 Amazon facilities in 13 countries “where there is evidence or reason to believe that Amazon has received public funding for its projects,” although full data is not available due to weak transparency laws.

This is particularly opaque for data centers, where the biggest subsidies are “electricity rebates and utility tax exemptions, which typically become permanent entitlements once granted.”

Like other tech giants, the group relies on secrecy machinations to cover up its subsidies. For example, Amazon received a non-disclosure agreement in Spain when the company was negotiating subsidies for a warehouse there. The researchers assume that Amazon is also most likely trading under the name of one of its more than 2,400 subsidiaries within the European Union.

“Amazon’s fast-delivery business model means the company must construct warehouses in communities anywhere near major transportation routes, airports, and other bases of business. There is no reason for national, regional, state, or local governments to offset Amazon’s costs of operations required for are central to its strategy,” said Kenneth Thomas, research associate at Good Jobs First and an expert on European and Canadian incentive schemes compared to those of the United States. “They should stop subsidizing Amazon and instead use the money to invest in small businesses and public services.”

“Amazon is one of the richest and fastest growing companies in the world. It had $44 billion in sales in Europe in 2020 but paid no corporate taxes – all while spying on workers and worsening working conditions,” said Christy Hoffman, General Secretary of UNI Global Union.

“The company shouldn’t get a dime from taxpayers.”

Just about a week ago, it became apparent that the US group far exceeded profit expectations: the surplus in the final quarter was $14.3 billion (12.5 billion euros), almost twice as high as a year ago. In the entire past fiscal year, Amazon increased sales by almost 22 percent to $469.8 billion.

The operating result increased by almost nine percent to 24.9 billion dollars. According to Paul Monaghan, executive director of the Fair Tax Foundation, tax data from Amazon last year showed that the US group had more revenue in Germany than in any other country outside the US. In the first year of Corona, Amazon’s sales in Germany increased by around 33 percent to around 24.7 billion euros.

“By providing Amazon subsidies, governments are providing aid to a multinational company that underpays workers, depresses wages, contributes to the downfall of small businesses and engages in anti-competitive behavior,” Hoffman said.

Amazon, on the other hand, responded promptly, calling the report “deliberately misleading” and citing jobs and investments that the company eventually offered. “In the last year, we’ve created more than 300,000 jobs worldwide, and over the past decade, we’ve contributed over $1 trillion to the economy in the US alone,” said an Amazon spokesman.

One of the catches, however, is that this way squeezed out smaller companies and in structurally weaker areas of all places, taxpayers’ money will also go from municipalities to such profitable corporations as Amazon. For example, Amazon has seven warehouses in Poland, where each region is poor enough to offer regional aid under EU state aid rules. At least two of the Amazon warehouses are in Poland, according to the report
Special Economic Zones (SEZ), which means a wide range of state aid for companies settling there.

“The problem [mit diesen Steuererleichterungen] is that they are not a very efficient use of public money,” explains one of the report’s authors, Kenneth Thomas. “Amazon could easily pay for these projects itself because the company has billions and billions of dollars at its disposal, but instead it uses its influence to get the government to pay for part of the project, even though that money could be invested in education, healthcare or infrastructure.”

The report concludes that countries and their sub-national governments should disclose the names of companies that have received subsidies. The authors recommend that governments stop subsidizing Amazon.

Good Jobs First focuses on tax breaks that private companies receive from the public purse, and has previously shown that taxpayers subsidize every aspect of the company’s gargantuan operations. UNI Global Union represents more than 20 million workers in 150 countries and champions workers’ rights.

While it is well known that on the upper floor of the US group, income could accumulate in such a way that so amateur astronaut trips into space are financed, the company is concerned that the employees in Bessemer, Alabama, to vote again on whether a US union will move into Amazon for the first time.

More on the subject – Corona crisis: Employers’ associations against a living wage