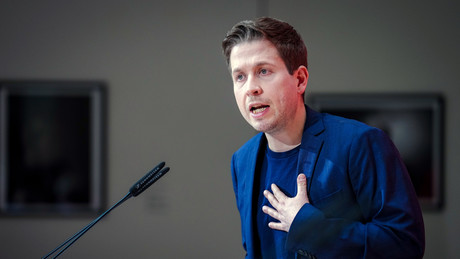 The Tagesspiegel brings Kevin Kühnert to distance himself from Gerhard Schröder. Not because of Hartz IV, but because the former chancellor is too pro-Russian. It is not Schröder who is damaging the reputation of the SPD on this point, but Kühnert. As long as there is still something that can be damaged.

Social Democracy and the Springer press had a difficult relationship for decades. Among other things, because people like Günter Wallraff, who wrote many bad things in his books about the BILD newspaper (“The man who was at BILD Hans Esser”), were also active in the SPD environment in the past.

But the paper’s more productive times are long gone, and if Kevin Kühnert, the current SPD general secretary, has one thing in common with Gerhard Schröder, it’s kneeling before the Springer press. Even if it’s against the former chancellor.

Now Gerhard Schröder has done enough to earn the old name worker traitor. The introduction of Hartz IV has not only impoverished millions, it has also left the country socially savage and established a contempt for the poor that is growing like a cancer. He and his government are responsible for the fact that millions of children continue to live in poverty in the middle of this supposedly rich country. There are good reasons to take a critical look at Gerhard Schröder.

However, Kevin Kühnert, who has as much to do with August Bebel and Wilhelm Liebknecht as a cell phone flashlight with a floodlight, manages, despite the many reasons for not liking Gerhard Schröder, to distance himself from the few points on which he was once right had.

Schröder spoke of “saber rattling in Ukraine” and the Tagesspiegel runs zu Kühnert, who immediately declared this an “abnormal position” and added: “The accusation of saber-rattling against Ukraine is an obvious distortion of the facts and, with all due respect, simply nonsense.”

Admittedly, the term “saber-rattling” is a bit fuzzy because it actually refers to the threat of bellicose action, which in Donbass has waned but never stopped. And “rattling” isn’t quite an apt acoustic comparison either; in fact, it already sounds like fireworks, with lower tones for the big guns, so that you can hear in the videos, for example from Gorlowka, whether a small portable mortar fired there or a howitzer. But in this bewildered German media landscape, the hint that the Kiev troops are not picking flowers and making wreaths day in and day out is a credit.

At Springer, absolute loyalty to NATO has always been a prerequisite for employment, and the Tagesspiegel always delivered exactly and exclusively what was expected of it. But the haste with which Kevin Kühnert jumps over the stick is a new low even for the adaptable German social democracy. Sure, that can’t keep up with the big historical models like the approval of the war credits in 1914, which gave the world the First World War, but Kühnert is clearly trying. After all, it is not in his hands whether he can catch up or even overtake in 1914.

In any case, the Tagesspiegel made a scandal out of the fact that a parliamentary state secretary from the SPD is said to have met with Schröder on January 5. As if that would immediately and inevitably provoke a course correction by the federal government; presumably transmitted by aerosols. But Kühnert plays along: Schröder “blurs the line between his business activities and the listening he gets as an experienced ex-head of government. That’s not only wrong, it’s even sad.”

Even if Schröder met State Secretary Saathoff as a Rosneft lobbyist, there are so many lobbyists in and around the Bundestag and in the government offices that even a Gerhard Schröder would no longer carry any weight. Lobbyists who are also members of the federal government, such as Karl Lauterbach, are more problematic. But since they say nothing positive about Russia, the Tagesspiegel has no problem with them. And apparently neither does Kühnert.

If it wasn’t a Russian commodity group, but a financial market monster like Black Rock, that wouldn’t be dishonorable, would it, Mr. Merz? Kühnert only comes to the conclusion that “Gerhard Schröder is damaging his public image enormously” because it is a Russian company. One could also say, as a peace-loving person, that he is regaining a little of the prestige he lost through Agenda 2010; but for that you would first have to be peace-loving, secondly have a minimum of political education and thirdly, because maximum Russophobia is the order of the day, at least have some backbone.

But we’re talking about the SPD and its offspring here, more than a hundred years after Noske. And this offspring is of the opinion: “I don’t see that he [Gerhard Schröder] could seriously damage his party, the SPD. His actions find no echo in our ranks.”

In the future, however, he should consult an osteopath before giving interviews to the Springer press. Stooping is not healthy in the long run.