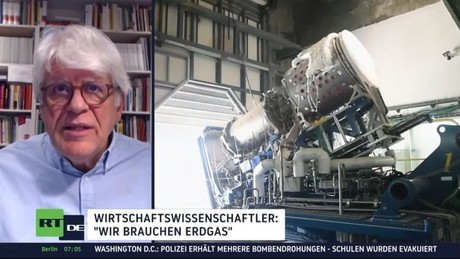 In Germany, as a simple consumer, you pay the highest electricity prices in Europe – and they reach new highs every month. RT DE spoke to the economist Prof. Dr. Heinz-Josef Bontrup on this development.

Last year, the electricity price in Germany was 32 cents per kilowatt hour, by far the highest in the EU and throughout Europe. Almost two thirds of all electricity providers have now increased their prices further for this year.

The economist Heinz Josef Bontrupa member of the memorandum group that prepares an alternative economic report every year and a regular author in various newspapers, considers natural gas and in particular the future from Nord Stream 2 to be indispensable:

“Electricity prices in Germany are very high, they are certainly the highest we have in Europe. This is also due to the fact that we have long since initiated an energy transition in Germany; this is having a gradual effect on electricity prices, and it will It won’t be the end either. We have to get the environment into the calculation.

If we want to get more and more into renewable energies, take coal-fired power plants off the grid – [aus der] We have now abandoned nuclear power – then we will need more gas-fired power plants for a transitional period. In this respect, I consider the Nord Stream 2 gas pipeline to be very important for Germany if we want to achieve the energy transition at all.”

40 percent of the electricity price is made up of taxes and duties. The former member of the Bundestag for Alliance 90/The Greens and since 2019 Chair of the Executive Board of the Federal Association of Energy and Water Management Kerstin Andreae called on the federal government to completely abolish the EEG surcharge, which, however, only represents part of these taxes. A reduction that has already taken place did not have the hoped-for dampening effect on the rise in electricity prices.

However, Federal Minister of Economics Robert Habeck declared at the end of January that Germany had to reduce its dependence on one natural gas supplier:

“If you don’t go through Russia, there is the theoretical possibility of supplying us from North Africa with a pipeline. That’s a bit longer way and France would have to allow construction through France. If that doesn’t work, you have to buy LNG .”

However, the infrastructure required for both variants is not yet available or foreseeable to an extent that comes close to covering demand.

More on the subject – “The dumbest energy policy in the world”: Skyrocketing electricity prices and destruction of the landscape