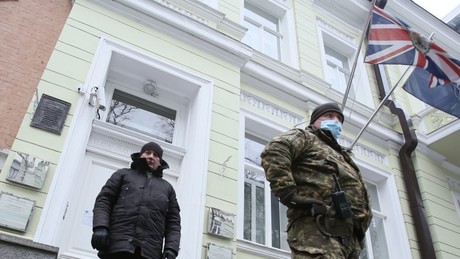 After the USA and the Netherlands, Great Britain also issued a travel warning for Ukraine within 24 hours and asked its nationals to leave the Eastern European country. Israel and the EU also issued travel warnings.

After the USA and the Netherlands had asked their citizens to leave Ukraine because of the acute danger of war, the British Foreign Office today also addressed this request to the citizens of the United Kingdom.

A statement released Friday night on the website of the Office for Foreign Affairs, Commonwealth and Development Aid said that all forms of travel to Ukraine are discouraged and that all British nationals should leave the eastern European country immediately.

A spokesman for the ministry stated:

“The safety of UK nationals is our top priority which is why we have updated our travel advice. We urge UK nationals in Ukraine to travel now via commercial routes while these are still available.”

The Foreign Office press release goes on to say:

“Brits who decide to stay in Ukraine should constantly review their departure plans and ensure their travel documents are up to date.”

It warns that “in the event of a Russian invasion” there will be no state evacuations:

“British nationals should not expect consular assistance or evacuation assistance in the event of an invasion by the Russian military.”

During the evening, Israel and the European Union also issued travel warnings calling for the immediate exit from Ukraine. According to information yet to be verified, Israel is currently evacuating its diplomats from Kiev despite the Sabbath rest.

European Union envoy to Ukraine Matti Maasikas has urged non-essential staff at his embassy in Kyiv to leave the country amid rising tensions with Russia. Like EU Observer reports, Maasikas sent a message to staff on February 11, urging international staff to leave as soon as possible. It says:

“Following an exchange with the headquarters in Brussels, I have urged all foreign colleagues, except for key staff, to leave Ukraine as soon as possible and to telecommute from outside the country.”

Also Estonia followed the example of the US and Great Britain and in the evening asked its citizens to leave Ukraine.

US President Joe Biden had on Friday morning Americans in Ukraine urged to do soto leave the country. At noon there was one corresponding declaration of the Netherlands released.

Previously, there had been evacuations of diplomats from several western countries and their family members from Kiev. Russian Foreign Minister Sergei Lavrov said in a joint press conference with his British counterpart on Thursday in Moscow that the evacuation actions of the “Anglo-Saxon countries” are taken seriously as a sign that the West is planning something in Ukraine. Therefore, expendable staff from the Russian embassy in Kiev and the consulates in other Ukrainian cities will also be evacuated.

The Ukrainian government accused the US of fomenting panic. Dmitri Kuleba, the country’s foreign minister, dismissed reports of an alleged “imminent” invasion last month, noting that the number of Russian troops near the border “is insufficient for a major offensive.”

On Wednesday, The Wall Street Journal reported that Ukraine’s President Vladimir Zelensky was concerned that repeated US warnings of an invasion could play into the hands of those trying to destabilize Ukraine and hurt its economy. US President Biden has already indicated that World War III could begin.

More on the subject – Netherlands advises nationals to leave Ukraine