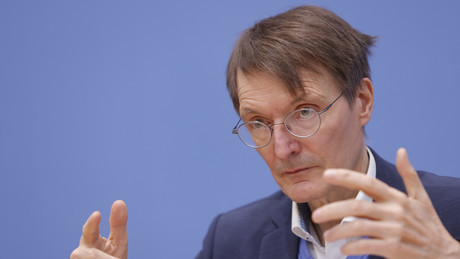 As a talk show expert, Karl Lauterbach hardly received any official criticism. At the post of Minister of Health, however, this is now getting louder. Now he wants to have calculated that up to 500 people could die every day if the corona measures were relaxed.

Since he has held the post of Minister of Health, it has obviously become increasingly uncomfortable for SPD politician Karl Lauterbach. While the debate about reducing the convalescent status to three months is still smoldering, compulsory vaccination is now also on the brink. The Bavarian Prime Minister Markus Söder announced that he wanted to “de facto” override this in his country. In addition, the situation around Omikron now allows the corona measures to be relaxed again. After all, the occupancy of the intensive care beds has decreased significantly, according to Söder, who just a few weeks ago was himself the advocate of a rigid corona policy.

In any case, the corona rules are either being relaxed or completely abolished in a number of European countries, as was the case recently in the Czech Republic. For Lauterbach, an unthinkably negligent approach with very likely catastrophic consequences. “CrazyLauterbach is certain that it will be to relax the corona measures when there are new maximum numbers of people who have tested positive.

On Tuesday evening, Lauterbach then named new and again increasing possible death tolls in the event that it was supposed to be relaxed too early. With up to 500 deaths daily, it is then to be expected. Lauterbach wants to have “calculated” this himself, as he says in ZDF betrayed.

“I just can’t imagine that we would be in a situation so late in the pandemic where we have good vaccinations, where we would have 400, 500 deaths a day.”

However, when asked by the public broadcaster, neither the Federal Ministry of Health (BMG) nor the Robert Koch Institute (RKI) wanted to comment on the data on which the Minister of Health’s calculations were based. And now it was the Ethics Council, who was also not previously known for his critical position towards the official Corona narrative, who spoke up in view of Lauterbach’s numbers – and sharply criticized the minister. Council member Stephan Rixen told ZDFheute on Wednesday:

Rixen also insisted that encroachments on fundamental rights “must be based on comprehensible forecasts of the further development of the pandemic”. “If it is not clear how the number of people who are likely to die due to easing came about, then it is also not clear why restrictions on freedom should continue to be necessary.”

The choice of words used by Hamburg’s CDU chairman Christoph Ploß in Bild is also unusual for political Berlin. According to the Christian Democrat, Lauterbach is about to become the “minister of fear”. However, “no overloading of the health system” is to be feared.

Now the minister had the unusually sharp criticism rejected by a spokesman. “The models of the RKI clearly show that rapidly increasing incidences also increase the number of deaths to be complained about every day.”

How strongly people protest today when people don’t like to hear it, but say it clearly: if our incidence increased significantly, we would have significantly more deaths. If you enter values ​​in the RKI model, it shows up immediately. Omicron wish sinking doesn’t help https://t.co/4eMzYRXoab

Lauterbach himself recently spoke up on Twitter. The minister sees himself as an unjustly oppressed bearer of unpleasant truths. “How much protest is being made today when you don’t like to hear it, but it’s obvious, saying: if our incidence would rise significantly, we would have significantly more deaths. If you enter values ​​in the RKI model, it shows immediately. Omicron wishful thinking doesn’t help.”

Meanwhile, the Vice President of the Bundestag, Wolfgang Kubicki, who has been questioning the official Corona policy for months, also spoke to Bild. It is “remarkable when the constitutionally justified goal of the corona measures is suddenly postponed – at the moment when there is no longer a risk of the health system being overloaded”.

More on the subject – Söder, Merz and Co.: The slow withdrawal movement of the Union from the Corona narrative