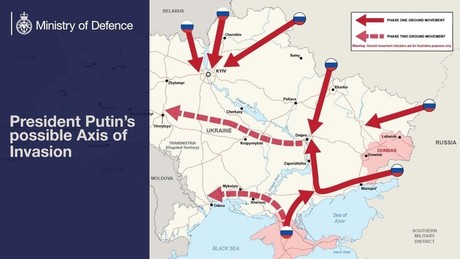 The West is sticking to the rhetoric of an imminent Russian attack on Ukraine. The British Ministry of Defense has now published a map that is said to show “President Putin’s possible axis of invasion”.

Red arrows cross Ukraine’s territory on a map released by Britain’s Defense Ministry on Thursday. The graphic is intended to illustrate the possible “axis” along which the alleged Russian invasion could unfold at any time. The British military referred to the map as “President Putin’s possible axis of invasion”. On twitter wrote the authority:

“Russia still has a significant military presence capable of launching an invasion without further warning.”

Truss added that reports of “alleged unusual Ukrainian military activities in the Donbass are a blatant attempt by the Russian government to fabricate a pretext for an invasion.” Following the news from London, US President Joe Biden claimed that Russia was facing an invasion “in the next few days”.

Meanwhile, US Secretary of State Antony Blinken told the UN Security Council that Russia intended to fabricate a “pretext” for an attack. This could be anything, such as “a fabricated so-called terrorist bombing inside Russia, the fabricated discovery of a mass grave, a staged drone attack on civilians, or a fake — or even real — chemical weapons attack.”

The US and UK have been accusing Russia of planning to invade Ukraine since late October. They have not yet provided any evidence to support this claim. However, this has not stopped several media outlets from already creating ominous maps of an impending “invasion”.

Moscow has always denied the allegations and labeled Western media reports as “fake news.” Even the government in Kiev has urged its Western allies to tone down the rhetoric, saying it is spreading panic and hurting Ukraine.

More on the subject – Kyiv: “There is no reason to believe that Russia will invade this week”