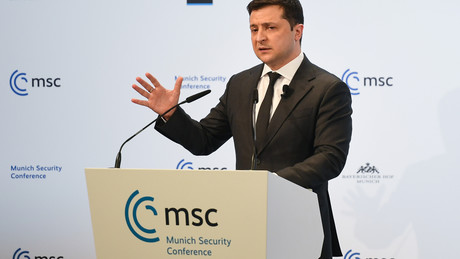 An analysis by Rainer Rupp

In a dramaturgically sophisticated appearance at the so-called Security Conference in Munich on February 19, 2022, the trained actor and comedian Vladimir Zelenskiy, in his role as President of Ukraine, threatened NATO with nuclear rearmament. He probably thought he could frighten the Russians with this, but in fact his mad plan may have frightened his western NATO supporters far more.

Ukraine has every right to become a nuclear power again, Zelensky underlined, citing a document signed by leading world powers after Kiev agreed to return Soviet nuclear weapons to Russia in exchange for security guarantees following the collapse of the Soviet Union. The document is the so-called Budapest Memorandum.

After the collapse of the Soviet Union, Ukraine briefly became the third largest nuclear power in the world. Their nuclear arsenal was part of the Soviet Union’s nuclear legacy left in the three newly independent states of Belarus, Kazakhstan and Ukraine. Altogether, Ukraine had about 1,700 strategic nuclear warheads and hundreds of delivery weapons, over which, in practice, Moscow, more precisely the Kremlin, had never relinquished control.

The danger that thousands of Soviet nuclear weapons would be stored in the unstable former constituent republics of the USSR in what was then the “Wild East” and could possibly go “wandering” into the terrorist underground was a single nightmare scenario for the Western powers at the time. With political promises and lots of money as a lubricant, the Western powers managed to persuade the governments of the three countries concerned to return their dangerous stockpiles of nuclear weapons to Russia, the actual owner and legal successor state of the Soviet Union.

In the Budapest Memorandum, Ukraine, Belarus and Kazakhstan committed to dismantling their nuclear arsenals or returning them to Russia and signing the Nuclear Non-Proliferation Treaty (NPT). In addition to the three former Soviet republics, the memorandum was also signed by the USA, Great Britain and Russia as guarantor powers. For their part, they had pledged to Ukraine to stand up for its “independence and sovereignty” and “the existing borders” of the nation. They also pledged not to use the threat of military force or economic coercion against Ukraine and to use their position on the UN Security Council to defend Ukraine “if Ukraine were to become the victim of, or the subject of a threat of, aggression involving nuclear weapons be used”.

In the years after the bloody Maidan coup against the democratically elected Ukrainian President Yanukovych, which was sponsored by the USA and financed with 5 billion US dollars, there have been repeated controversial interpretations of the Budapest agreement. Kiev has argued since 2014 that Russia broke the deal when it “occupied” Crimea and parts of eastern Ukraine. Moscow denies this. The people of Crimea, the Russians argue, were exercising their right to self-determination under the UN charter in the face of the threat posed by the heavily armed fascist volunteer battalions advancing from Kiev. In a referendum, the people of Crimea voted by a very large majority to withdraw from Ukraine and apply to join the Russian Federation, which was approved by the Russian Parliament and signed by the President. According to Russia, the conflict in the Donbass is a civil war started by Kiev against breakaway regions and not an international conflict. At the same time, the United States and Great Britain have not breached their obligations under the Budapest Memorandum, because Ukraine has never been threatened by the use of nuclear weapons. Also, as Kiev likes to claim, Russia has never declared war on Ukraine.

So much for the historical and legal background to the former, albeit short-lived, nuclear power Ukraine. But what are Kiev’s chances for nuclear rearmament? Legally, nothing prevents Ukraine from withdrawing from the NPT and developing its own nuclear weapons. North Korea has successfully followed this path, despite all international efforts to stop Pyongyang. There are also the examples of India and Pakistan developing nuclear weapons for mutual deterrence, and the example of Israel. Kiev’s technical ability to produce nuclear weapons is another matter. True, Ukraine has some nuclear research institutions and a developed civil nuclear industry with some old reactors in power plants built in Soviet times. As for delivery weapons, Ukraine used to have a well-developed but now outdated aerospace industry that was once capable of producing ICBMs and heavy bombers.

On the other hand, Ukraine has never had the uranium enrichment or plutonium reprocessing facilities needed to produce weapons-grade material. There were also no factories that produced nuclear weapons on Ukrainian territory. In terms of raw materials, the country has had uranium-bearing mining operations since the 1950s. But production has declined significantly in recent years. The mines require huge investments and thus a lot of money that Ukraine does not have to become productive again.

Some Ukrainian experts, like retired General Petro Garashchuk, claimed that Ukraine retained enough technical know-how to produce a full range of nuclear weapons and delivery systems, according to a report by RT-International. This is also confirmed by Ilya Kramnik, a researcher at the Center for North American Studies at the Institute of World Economy and International Relations, according to RT: “Technically, Ukraine has an industry that, with some modifications, should be able to produce nuclear weapons systems,” Kramnik said . The problem lies in the term “with some modifications”. These are high technologies that are not manufactured by Ukraine and therefore have to be imported from abroad. However, these technologies fall under the Non-Proliferation Treaty (NPT) and thus their export is prohibited. It is also hard to imagine that the US or other Western Ukraine supporters would come to Kyiv’s aid in this regard. There are mutliple reasons for this:

– Knowing on NATO’s eastern flank an unstable but nuclear-armed Ukraine, whose security organs and ministries are riddled with nationalist extremists and outright fascists who could start a war with Russia at any time, would neither in Washington nor in the NATO European capitals the Let those responsible sleep peacefully

– By supplying Ukraine with NPT-banned technologies, the US and other western states would break through the dam that they themselves have laboriously built over decades of NPT export policies against Iran and other countries in the Middle East, for example.

It is also important in this context that Kiev would not be able to secretly develop nuclear weapons. At the very least, it would have to run tests to confirm that its designs actually work. Other parts of a successful nuclear weapons program would also be detectable by both Western nations and Russia. There is little doubt that Moscow is more sympathetic to the threat of secretly going nuclear in Ukraine than it was to Israel when it bombed Iraq’s nuclear facilities.

Given all the problems that would face Ukraine’s Western backers if Kiev openly declared its intention to develop nuclear weapons, it is safe to assume that the West will not only refuse any help to Kiev, but will do everything to prevent it stop his plans. In addition, a nuclear program is very expensive. And foreign investments would certainly stay away if it became known that Ukraine had a nuclear weapons program. Instead of economic aid and cash injections, even economic sanctions would be likely. “Personally, I believe that there is not a single nuclear power that will help Ukraine go down this path,” Kramnik said. “Simply because no one wants to deal with the inevitable consequential problems that will arise the day it is known for sure that Ukraine is developing nuclear weapons.”

Rather than offer their approval and assistance, the US and its allies would work against Ukrainian nuclear weapons plans from day one, possibly even imposing economic sanctions. Ukraine’s current economic situation and the government’s reliance on foreign aid cast doubt on Kiev’s chances of doing what North Korea has done.

It is hard to imagine that the President of Ukraine, or the people who advise him and write his speeches, would not know that a Ukrainian nuclear weapons program is a shambles. And yet Zelensky made this a central point of his speech in Munich. His threat of a Ukrainian nuclear weapon to his own supporters is not new either. For years it has been haunting the discourse of Ukrainian foreign policymakers. Above all, the friend of the German Greens, Andrei Melnik, who is Kiev’s ambassador in Berlin, stands out in this regard. Yes, it is Melnik who believes he can swear at the German government and the Bundestag even worse than the megalomaniacal US cowboy, Ambassador Richard Grenell, did not so long ago.

Selensky himself gave a possible explanation for this strange behavior in Munich, when he appealed to the illustrious audience at the “UN Security Conference”: “Give us money without making any conditions attached to it. Why do you have to give us these or allocate that sum, tie the implementation of one, two, three, four, five, seven, eight, ten reforms to it?” he said at a panel discussion after his speech. “Look, there is also war. Is there another nation in the world that has such a strong army in the east and is implementing reforms? It’s not easy,” Zelensky added.

Ukraine’s nuclear ambitions being flaunted in Munich, then, appear to be merely part of an attention-grabbing campaign to persuade western donor countries to pour even more taxpayers’ money into Ukraine’s bottomless pit. Nevertheless, the Ukrainian strategy games with nuclear weapons should not be downplayed, because they show the spirit of the Russian-hating elites in key positions in the Ukrainian military, police, secret services, security council and judiciary.

More on the subject – Live ticker on the Ukraine crisis: acts of sabotage / deaths among civilians / Kiev demands weapons