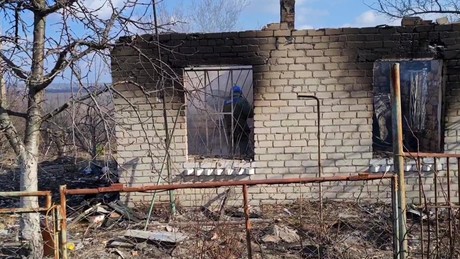 Representatives of the Luhansk People’s Republic accuse Ukraine of constant ceasefire violations in the Donbass, which leads to the evacuation of people to Russia. The OSCE also provides information about the shelling of civilian infrastructure in the two breakaway areas.

The Mission of the Organization for Security and Co-operation in Europe (OSCE) in Donbass has confirmed that the Ukrainian armed forces violated international humanitarian law by shelling residential buildings in the region, the Luhansk People’s Republic (LPR) mission said.

“In its report of February 21, 2022, the OSCE mission confirmed violations of international humanitarian law by Ukrainian troops and noted damage to residential buildings and serious damage to the production facilities of an oil workshop caused by the shelling of the settlement of Nikolayevka with 122mm artillery shells were caused,” said the LVR militia.

In the Lugank area, the Mission recorded 1,073 ceasefire violations during the same period, including 926 explosions. A map shows that most of the shelling hit the two People’s Republics.

The situation in Donbass remains tense as the DPR and LPR carry out mass evacuations of civilians due to frequent attacks by Ukrainian forces. Following a recent appeal by the heads of the Donetsk and Luhansk People’s Republics, Russia has recognized both as independent states. Moscow ordered a peacekeeping mission to be sent to the Donbass to end the conflict and called on Kiev to “immediately cease hostilities in the region”.

More on the subject – Live ticker on the Ukraine crisis: recognition of the people’s republics / Putin commissions peacekeeping troops