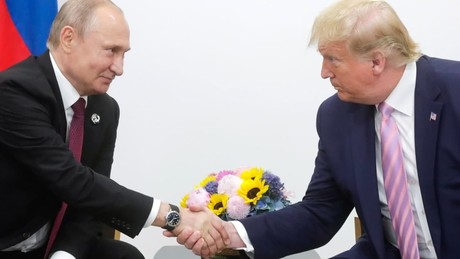 In an interview, former US President Donald Trump criticized Joe Biden’s handling of the Ukraine crisis and described Russia’s actions in Donbass as “brilliant”. At the same time, he claimed that with him as President, the current situation in Ukraine would not have happened.

“I walked in yesterday and there was a TV screen and I said, ‘That’s awesome,'” Trump commented in one on Tuesday interview with radio host Buck Sexton. “Putin declares a large part of Ukraine – Ukraine! – independent.” He added spitefully, “Oh, that’s wonderful.”

Trump was referring to Putin’s announcements on Monday that Russia would immediately recognize the sovereignty of the DPR and LPR, which declared their independence from the Kiev coup government after the overthrow of the elected Ukrainian leadership in 2014, which was massively supported by the USA, among others. Following this decision, the Russian President on Tuesday obtained the approval of the Russian parliament to send Russian forces as peacekeeping forces to the territories of the DPR and LPR in the Ukrainian part of Donbass if necessary. He later made it very clear that this approval does not mean that Russian troops will immediately be sent to the republics.

Trump, as a former US commander-in-chief, said such a turn of events would never have happened if he were still in office as US President. He accused his successor of incompetence while calling Russia’s actions in the Donbass, including Moscow’s potential peacekeeping mission, “smart”.

Biden on Tuesday announced U.S. economic sanctions against Moscow and the deployment of more U.S. forces to the Baltic region in response to what he described as “the beginning of a Russian invasion of Ukraine.” Trump has argued that Russia is essentially grabbing territory without serious consequences, which he says is because Putin is a “smart guy.”

“I have to say, that’s pretty smart. And you know what Biden said in response to that? There was no answer. They didn’t have one for that. Well, that’s very sad.”

When asked by Sexton how the US strategy regarding Ukraine got so out of hand, Trump replied:

“What went wrong, that was a rigged election, and what went wrong is a candidate who shouldn’t be there… a man who has no idea what he’s doing.”

More on the subject – Donald Trump: “Biden’s incompetence is leading us to World War III”