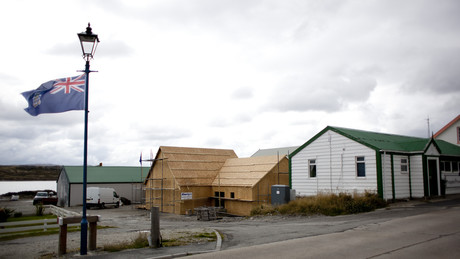 Great Britain calls the archipelago in the South Atlantic “Falklands”. For Argentina, it’s the “Islas Malvinas”. If Beijing now supports Argentina’s right to self-determination, it is also because of access to Antarctica. UN law continues to gain in importance.

On the fringes of the Winter Olympics, talks took place between Chinese head of state Xi Jinping and his Argentinian colleague Alberto Fernandez. The subject was the signing of a memorandum that now also includes this Latin American country in the “Belt and Road Initiative” (BRI), better known in German as the “New Silk Road”. China is thus further expanding its influence on the Latin American continent. In recent weeks, several Chinese authorities have also announced their support for Argentina’s right to self-determination on the archipelago that lies around 1,500 km from the mainland in the South Atlantic.

The Role of the Islands and the Law of the Sea

The British government reacted with indignation to the proclamation of the Embassy of the People’s Republic of China in Great Britain. In 1982, London and Buenos Aires fought a war over the islands where Scottish emigrants once began herding. The war ended in a British victory, credited to Prime Minister Margaret Thatcher as a result of her intransigence. In 2003 there was a referendum in which the islanders declared their allegiance to Great Britain. If for centuries these islands were primarily of geostrategic importance, providing a base and supplies for the British fleet, I believe that with the entry into force of the UN Convention on the Law of the Sea in 1994 and the establishment of the Commission on the Limits of the Continental Shelf, their geographical importance has increased of the islands increased again due to their proximity to Antarctica.

International law developed over centuries on the basis of common law; This is how the states regulated their sovereign powers in the coastal waters and their rights on the high seas. Territorial conflicts over fisheries and increasing seabed management with the rise of oil and gas exploration have necessitated comprehensive codification of state practice. International law experts have been working on a comprehensive revision of the law of the sea since the late 1960s. From the date of entry into force of the Convention, a ten-year period began during which the States Parties could submit their information on the continental shelf.

The Russian submarine in the Arctic

Do you remember August 2006, when a Russian mini-submarine hoisted the Russian flag in arctic waters 4,000 meters below sea level? With this expedition to the Lomonosov Archipelago to take rock samples, Russian scientists led by the oceanologist Arthur Chilingarov, then Vice President of the Duma, laid claims to the geological extensions of the archipelago for the purpose of fixing the continental shelf. The result was a possible additional Russian territory of 1.2 million square kilometers. This area was already of potential importance for Russian and international oil companies at that time.

The demarches of Russia are to be understood in the practical implementation of this UN Convention on the Law of the Sea and immediately encountered opposition from Canada, which for its part is consistently pursuing territorial ambitions up to the North Pole. In Washington, it was noticed for the first time that this important UN convention had concrete territorial consequences. Even a US President, George W. Bush, who otherwise had no particular interest in international law, stepped in to persuade the US Senate to ratify it. Vain.

The race to extract raw materials and the development of new transport routes in the Arctic has been going on for decades. Russia is currently chairing the Arctic Council for two years. The region is becoming increasingly important, which goes beyond international legal issues. The development of new transport routes such as the Northwest and Northeast Passages as a result of ice-free phases is shifting trade relations. In my 2017 book The Changing of the Guard, I wrote about the ongoing paradigm shift from a transatlantic to a Pacific world order.

What is developing in the Arctic could also be forthcoming in the Antarctic. The continent has a special status under the Antarctic Treaty, which prohibits military activities and territorial claims. But things are in flux and how quickly international treaties are unfortunately overturned, how massively the UN Charter is violated, has been shown again and again in recent years.

The Antarctic Treaty defines the entire area 60 to 90 degrees south latitude as Antarctica, that is, the continent, the islands, the ice shelves and the ocean. The contracting states agreed on the peaceful use of Antarctica, a ban on military activities and free international research cooperation. Territorial claims of individual states were frozen.

Those who control the islands in the South Atlantic and their continental shelves can, in the long term, get involved in the concert of power and the race for concessions that could come at a time when raw materials are scarce. The old conflict around the Falklands or the Islas Malvinas has been smoldering for years. London is aware of the importance of such islands, where colonial rule has been exercised since 1833, with the foreign policy line of “Global Britain” being active worldwide. The tone between Buenos Aires and London has been becoming more warlike for years.

If China now supports Argentina and calls for the right to self-determination, then Beijing also knows how useful such good relations with a Latin American partner are in terms of the Silk Road doctrine. Even the island of St. Helena, the former exile of Napoleon Bonaparte, is gaining new relevance in our times. The law of the sea is no longer a boring discipline, but provides deep insights into global geopolitical developments. The Falklands dossier, the Islas Malvinas, will therefore remain on the agenda.