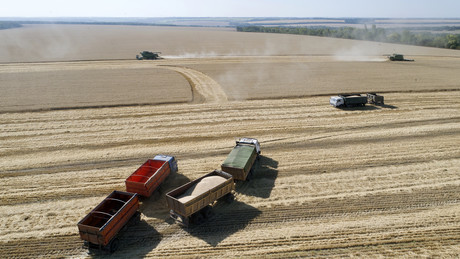 Host China used the Winter Olympics in Beijing to demonstrate unity with its Russian neighbor. In view of the harsh sanctions against Russia from the West, China is now clearing the way for imports of Russian wheat from all regions of Russia.

The Chinese customs authority has announced that the country is paving the way for the import of wheat from all regions of Russia, instead of only from certain designated areas as before. The move is part of a series of agreements signed by President Vladimir Putin during his recent visit to Beijing. During the visit, China and Russia let the world know that their partnership has “no borders”.

Bilateral trade between China and Russia surpassed $100 billion in 2018. The declared goal is to double the trading volume by 2024. Cooperation in the energy sector is also to be intensified. To this end, a 400 billion dollar agreement was passed on the transport of natural gas from Russia and several joint nuclear power plant projects in China. Moscow is also Beijing’s largest arms supplier. Between 2014 and 2018, 70 percent of Chinese arms imports came from Russia.

Chinese Foreign Ministry spokeswoman Hua Chunying, warned of a further escalation of the situation in Ukraine. She quoted former US Secretary of State Henry Kissinger:

“If Ukraine is to survive and prosper, it must not be the outpost of one side against the other – it should act as a bridge between them.”

More on the subject – US analyst: China will benefit from anti-Russian sanctions