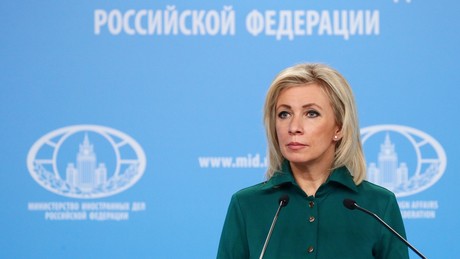 Maria Zakharova, official representative of the Russian Foreign Ministry, spoke about current events in Ukraine in an interview with RT. According to her, what happened there was not the beginning of an escalation, but its end.

The West has ignored the “sea of ​​blood” in Donbass for eight years while arming the rest of Ukraine, Zakharova told RT on Thursday. “For them, the people who live in Donetsk and Lugansk don’t exist. That’s several million.” When Moscow intervened to resolve the conflict, Russia was labeled an aggressor.

If the international community had noticed the war in Donbass for eight years, if this community had said that civilians should not be killed in Donetsk and Lugansk, if the international community had seen how many people are already dead there, had spoken about human rights , had talked about the need to end the conflict, I would probably believe her again this time. But they didn’t notice any of this. They did everything so that representatives of the Donetsk and Luhansk People’s Republics could never attend meetings of international organizations where the Donbass issue was discussed.

She also accused western media of neglecting the conflict for years.

Regarding President Vladimir Zelensky’s statement that Ukraine wants peace, Zakharova asked why the country was arming itself and refusing to negotiate with Donbass. “If Ukraine spoke of peace, why did it need so many weapons?” she asked. “It was clear that these were offensive weapons. Against whom were they fighting? Against their own people in south-eastern Ukraine”.

Zakharova stressed that Ukrainian officials had raised the issue of acquiring nuclear weapons in recent weeks. This is a real fact and not something claimed by Russian intelligence.

The current events in Ukraine are not the beginning of a war, but rather its end, the spokeswoman summed up: “The task of this operation is to stop the escalation of the war that has been going on for eight years and to end this war. If you can do that in the West doesn’t want to see that will be another historical mistake.”

On the other hand, the Ukrainian President Zelensky suspected that the Russian military operation was intended to overthrow him. Late on Thursday evening, he had ordered a general mobilization that would last for 90 days and would call for conscripts and reservists to be called up.

More on the subject – Zelensky: Are ready to talk about security guarantees and neutrality