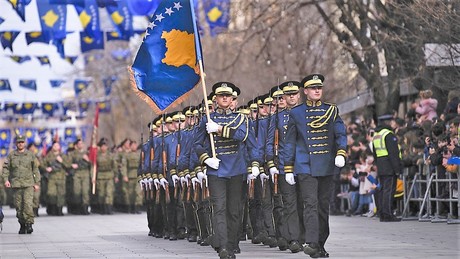 The US has one of the largest US bases outside of the United States in Kosovo. Now the breakaway Serbian province has announced that it will ask Washington for permanent military presence on its territory, as well as faster NATO admission.

The breakaway Serbian province of Kosovo, which declared independence in 2008, has announced that it will ask Washington to establish a permanent military base on its territory. The United States already operates one of the largest bases outside of the United States with “Camp Bondsteel” – a base of KFOR troops in Kosovo.

Meanwhile, Pristina also called on the United States and its allies to speed up NATO admission. Four members of the US-led military alliance are still refusing to recognize Kosovo as an independent state.

In a social media post on Sunday, Kosovar Defense Minister Armend Mehaj argued that given the ongoing military conflict between Russia and Ukraine, Pristina urgently needs “accelerated membership” in NATO and the establishment of a “permanent base” for American forces ” have. The permanent stationing of US soldiers is necessary to “guarantee peace, security and stability in the western Balkans and beyond”.

According to Mehaj, Kosovo’s accelerated membership in the transatlantic military alliance is “an immediate necessity to ensure security and stability in the region and beyond, as Europe and the world face a serious security challenge following Russia’s severe aggression against Ukraine.”

Kosovo ?? accelerated membership to #NATO is an immediate need to guarantee security and stability in the region and beyond as Europe and the world is facing a serious security challenge after Russia’s severe aggression to Ukraine.

The Republic of Kosovo and its citizens have demonstrated their “unshakeable commitment to democratic values ​​and peace,” Mehaj continued. At the same time, the Minister of Defense of Kosovo added that now is the time for NATO member states that have not been ready to recognize Kosovo as an independent state – namely Greece, Romania, Slovakia and Spain – to do so. “Don’t hesitate any longer!” so Mehaj.

Just over 50 percent of UN member states have now recognized Kosovo, which declared its independence from Serbia in 2008 with Western support. Serbia, Russia, China, Argentina, Brazil, India, Indonesia, Mexico and South Africa still consider it a breakaway region from Serbia.

In March 1999, NATO launched a 78-day campaign of airstrikes against what was then Yugoslavia, ostensibly to protect civilians from atrocities by Serb forces during an uprising by ethnic Albanians in Kosovo.

However, the military offensive, code-named Operation Allied Force, has resulted in heavy civilian casualties and the subsequent displacement of an estimated 200,000 ethnic Serbs from the province. In the course of the “humanitarian intervention” targets were bombed throughout the territory of what was then Yugoslavia. Among other things, bridges, a television station, dozens of schools and over 20 hospitals were destroyed and around 40,000 houses damaged.

More than 4,000 soldiers are still deployed in the split-off province as part of the NATO-led KFOR mission for security and peace. The US itself has around 600 soldiers stationed in the Western Balkans.

More on the subject – Kosovo: 17 years after the largest outbreak of ethnic violence despite NATO and the UN on the ground