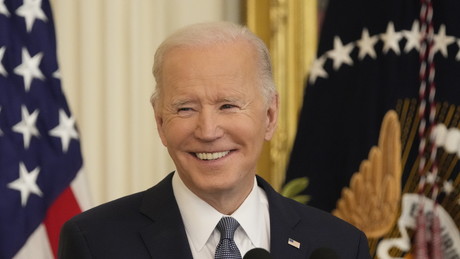 The chorus of hatred and the crowd’s attunement to retaliation against the evil Russians is becoming increasingly dangerous. Sober voices or self-critical questions as to how this situation came about in the first place have become rare. Washington has not had such a tight grip on Europe in decades.

In Berlin there are now peace demonstrations against Russia. There, Ukrainian admirers of the SS and supporters of the Azov battalion of fascist volunteers operating in the Donbass protest together with peace-loving Germans, including young leftists. Only a few of them probably know who they are demonstrating with. They have internalized the image of the Maidan putsch drawn by the federal government and media groups as a “revolution of dignity.” And they have no idea that with the help of this US-sponsored coup, real-life fascists, admirers of Joseph Goebbels and Adolf Hitler, with the blood of dissident Ukrainians on their hands, took key positions in the state control centers, especially in the security organs of the post-Maidan occupy Ukraine.

What’s really going on in Ukraine since the bloody coup against the democratically elected President Yanukovych outside of the besieged and daily shelled Donbass can be quickly seen by every visitor at the monuments that have sprung up everywhere like mushrooms for the NAZI, who were officially declared “Heroes of Ukraine”. -See collaborators. Like Stepan Bandera, for example, who, with his auxiliaries, carried out the mass shootings of tens of thousands of women and children, from which even the SS leadership wanted to protect their own troops because of the destructive psychological effects of such extreme atrocities. Against this background, it is completely incomprehensible that the memorials to these Bandera murderers in western Ukraine are repeatedly decorated with fresh flowers.

Since the beginning of the Russian operation to end the constant threat of the fascist battalions to Donbass and to demilitarize and denazify the rest of Ukraine, politicians, media, talk show speakers and even representatives of the trade unions in Germany have been in a state of constant gasping. With pseudo-intellectual nonsense and emotional turmoil, they try to outdo each other in their anti-Putin baiting. With self-righteous hubris, the chorus of hatred and the crowd’s attunement to retaliation against the evil Russians grows ever more dangerous.

Sober voices or self-critical questions as to how this situation came about in the first place have become rare. There is a lack of rational analyzes as to whether the West and possibly also the German government are partly to blame for Chancellor Scholz’s disastrous behavior in Moscow. Nobody seems interested. why? The thing is clear: the Russians are to blame!

Against this background, it is all the more gratifying that even in the USA there are politicians who have not committed themselves to hysterical hating of Russia. Well-known Democratic Congresswoman Tulsi Gabbard tweeted:

“This war and suffering could have easily been avoided if Biden, US/NATO had simply acknowledged Russia’s legitimate security concerns over Ukraine’s entry into NATO, which would mean US/NATO forces stationed directly at the Russian border would be stationed.” (4:57 AM February 24, 2022 Twitter Web A)

It might be worth taking a brief look back at this point. In recent months, the West has tried in vain to narrow down this fundamental conflict of interest between Russia and US-led NATO, which President Putin has addressed, to the “Ukraine conflict” and the supposedly “imminent invasion”, with increasingly hysterical war cries. At the same time, a large number of high-level meetings between Russians and US/NATO representatives took place in a wide variety of diplomatic formats. But with the exception of the French president, who called Russia’s demand for equal security “legitimate,” the US and its Western vassals have failed to address Russia’s core problem at all. Namely to the demand for the same security with a corresponding binding guarantee, and not just nice words.

Most recently, Chancellor Scholz also snootily dismissed the Kremlin and insisted on the hypocritical US/NATO formula that each country can freely choose its own military alliance – which the US, however, refuses to countries like Cuba, Venezuela or Nicaragua under threat of violence.

Meanwhile, Putin had made it unmistakably clear that another, sixth wave of NATO’s eastward expansion would be a “red line” for Russia, ie a “casus belli”. Because in reality, that means NATO militarily upgrades a new member at the expense of Russia’s security and pushes NATO’s infrastructure even closer to Russia’s doorstep. At the same time, the Kremlin chief named two other “red lines” as reasons for the war:

– if NATO or an individual NATO state deploys nuclear weapons and/or corresponding delivery systems in Ukraine, and

– when the population of Donbass is in danger of being overrun and slaughtered by the nationalists.

In order to distract from the demand for equal security, the US/NATO had tried every day for months to proverbially induce the supposedly imminent invasion of Ukraine. With Russia negotiating rather than launching the invasion Washington apparently wanted, US/NATO hawks began to fear that the opportunity to incite war in Ukraine was going to be missed. Because for Washington, this crisis is not about Ukraine, but about poisoning the previously good relations between Russia and the EU – especially between Russia and Germany – in the long term.

A new way to this goal was quickly found. Putin had inadvertently shown this himself with his “red line” No. 3: when he declared that Russia would only intervene militarily in Ukraine if there were a new massive attack against the population in Donbass. This followed immediately with the massive expansion of artillery attacks on villages in the Donbass by the western Ukrainian NAZI brothers-in-arms. So the US warmongers got their Russian intervention after all. And so, thanks to Ukraine, they have achieved their strategic goal, at least in the short, if not the medium term.

Washington and the Atlantic media corporations now dominate all channels with the narrative of Ukraine as the innocent victim of Russia’s lust for aggression and great power 24 hours a day, 7 days a week. And those pulling the strings in Washington didn’t expect too much of it, as the recent reactions of their vassals show:

– a new strong revaluation of NATO, already described by the Frenchman Macron as “brain dead”;

– a permanent wedge between Germany and Russia and solidarity with NATO and Washington.

– the end of Nord Stream 2 is just the beginning, as US politicians already have Nord Stream 1 in their sights;

– long-term harsh sanctions against Russia designed to kill the economy.

The success of this strategy depends on whether Washington, with the help of Atlantic politicians and media, can firmly transplant its narrative into the minds of the people of Europe over the next few months. Furthermore, US success will depend on how quickly the masses of Western Europe feel the ravages of self-destructive economic sanctions against Russia through inflation and higher unemployment in their wallets, and whether or not they blame their political leaders who, with the help of the media, succeed in blaming the Russians for this as well.

The Europe of the EU is currently at a crossroads. The US operation in Ukraine could acquire historic significance if the vast majority of people in Western Europe once again see the US as the irreplaceable protector against the Russian barbarians. Then Washington will possibly be able to live out its political, economic and military dominance over Europe unhindered for many more years; to the detriment of all peoples of Europe. This bleak future can only be prevented if as many people as possible raise their voices and enlighten their fellow human beings about the background.

More on the subject – Live ticker on the Ukraine war: the center of Donetsk and the TV tower in Kyiv were shot at