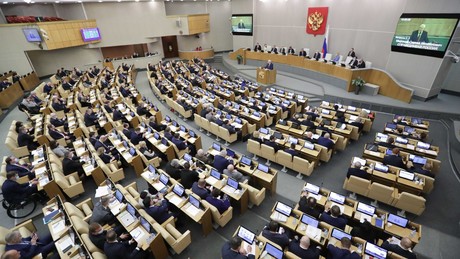 On Friday, the State Duma approved a bill to punish false reports about the actions of the Russian armed forces. Anyone who calls for sanctions against Russia will also be punished. There is a risk of up to 15 years imprisonment.

Against the background of the war in Ukraine, the State Duma passed a law against the spread of false information about the actions of the Russian armed forces. According to the TASS news agency, the document was adopted in both the second and third readings. The lower house of parliament voted unanimously in favor of the bill. According to State Duma spokesman Vyacheslav Volodin, the document will be presented to the Federation Council on Friday and then sent to the President. However, both are considered formal. The law could therefore come into force as early as Saturday.

Calls to prevent the deployment of Russian troops are punishable by a fine of 100,000 to 300,000 rubles (820 to 2,500 euros) or up to three years in prison. If such calls lead to serious consequences, the fines or imprisonment are even higher. What exactly is meant by “severe consequences” is not precisely defined.

Demands for sanctions against Russia are punishable by a fine of up to 500,000 rubles (4,200 euros) or up to three years in prison.

Maria Zakharova, spokeswoman for Russia’s Foreign Ministry, said this week that there is currently a “colossal flood of false reports” about the actions of the Russian military in Ukraine.

The Russian Media Regulatory Authority warned that Russian media should only report on the situation in Ukraine based on information from official Russian sources. The agency asked the media to remove reports describing what happened as “war” or “attack” and has already blocked several independent media outlets.