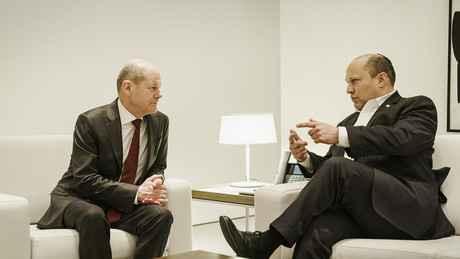 Israeli Prime Minister Naftali Bennett met Chancellor Olaf Scholz in Berlin on Sunday night at short notice. The reason for the conversation is said to have been the meeting between Bennett and Russian President Vladimir Putin a few hours earlier.

Against the background of the flaring up war in Eastern Europe, Israeli Prime Minister Naftali Bennett and Federal Chancellor Olaf Scholz (SPD) met at short notice on Saturday evening. Bennett had previously been in Moscow for talks with Russian President Vladimir Putin.

The talks, which took place at the Chancellery in Berlin, are said to have focused primarily on Bennett’s talks with Putin regarding Ukraine. “The focus of the 90-minute conversation was the results of the conversation that the Prime Minister had with Russian President Vladimir Putin in Moscow on Saturday,” said government spokesman Steffen Hebestreit on Sunday night.

The joint goal of Germany and Israel remains to end the war in Ukraine “as quickly as possible,” the statement said. We will work on that with all our might. At the meeting, which was scheduled at short notice, the two heads of government agreed “to remain in close contact on the matter.”

Bennett, who is to act as a mediator in the Ukraine conflict at the request of Ukrainian President Vladimir Zelensky, traveled to Moscow on Saturday and spoke to Putin there about the war in Ukraine. According to Israeli government circles, the talks lasted three hours and had previously been coordinated with the United States, Germany and France. After the meeting, according to an Israeli government spokesman, Bennet informed the Ukrainian president and traveled to Berlin.

Israel is said to act as a mediator in the conflict in Eastern Europe because the country in the Middle East has good relations with Russia and Ukraine.

More on the subject – Rocking course: New US strategy is urging Middle East countries to correct their foreign policy course