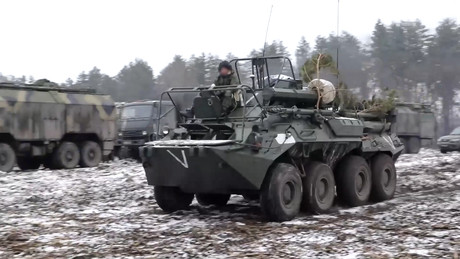 Is the Russian military operation in Ukraine a failure, as our media claim? Former US officer Scott Ritter disagrees. This is the fastest advance in history, he says, while trying to spare not only civilians but also enemy soldiers.

If one believes the portrayal of the German media, the Russian military operation in Ukraine is on the verge of a colossal failure. The Frankfurter Rundschau called refers, for example, to former US Lieutenant General Frederick B. Hodges, who said that the leadership in the Kremlin wanted to use sheer mass to distract from their own mistakes, and that “their poor planning, the miserable logistics and the incorrect assessment of the Ukrainian fighting power” had the Russians armed forces in a hopeless situation.

The daily News takes over echoes the Ukrainian accounts and cites the General Staff in Kyiv claiming that “the moral and psychological state of the enemy remains extremely low” and that Russian troops are deserting in droves.

The Tagesspiegel even wants to refer to an unnamed FSB officer – allegedly confirmed by Bellingcat appointedwho is said to have said that the “Blitzkrieg” had failed and that it was impossible to achieve the Russian goals anyway.

Scott Ritter’s assessment sounds quite different. Ritter began as a reconnaissance officer for the US Marines, served the US in the Soviet Union as inspector for the implementation of the provisions of the INF Treaty, served on the staff of General Norman Schwarzkopf during the Second Gulf War and then served as US representative from 1991 to 1998 took part in the UNSCOM mission to control weapons of mass destruction in Iraq. He is one of those ex-US military personnel who, after leaving service, developed a very critical attitude towards US politics and is now a prominent opponent of war policy.

in the interview With the US comedian Lee Camp, Ritter, who after all has also dealt academically with Soviet military strategy for a long time, made fun of these assessments: “The mainstream media claim that they have the Russian strategy book, because I keep hearing that this invasion is not after We see here a classic multi-axis invasion, trying to immobilize the enemy troops, destroy their command and control structure, encircle them and capture strategic points.The advance is faster than that of the German blitzkrieg of WWII .”

“It’s not slow at all, no, it’s the fastest advance in history.”

“Normally in a military operation you want a three-to-one advantage on the offensive, the Russians actually come in at a one-to-three, one-to-four disadvantage. But according to last week’s data, they have a one-to-six advantage on the losses.”

In the major battles of World War II, this ratio between winners and losers was 1 to 1.2 or 1.3. One in six is ​​an absolute defeat.

Nevertheless, the Russian army foregoes many possible advantages. “I was surprised, like everyone else, when they started this offensive, almost with one hand tied behind the back.” They had the opportunity to destroy Ukrainian troops in the barracks, but decided not to do so because they not only wanted to kill as few civilians as possible, but also as few Ukrainian soldiers as possible.

The Ukrainian army put up a solid fight, but they lost:

“Sooner or later you will see them surrender en masse, running out of ammunition, food, water or gas, and faced with the choice of giving up a senseless resistance or dying.”

Ritter describes classic Russian tactics like this: “Determine the location and then wipe it out with massive artillery fire, rocket launchers and mortars and then roll over it like a steamroller.” This time the Russian army renounced the advantage of fire superiority. “If you do that to an enemy unit in a built-up area, or in a densely populated suburb, it will result in the deaths of tens of thousands of civilians.” Artillery is only used if there is precise knowledge of the enemy’s capabilities and localization.

Of course, nothing is certain in a war, and even with the best efforts to find out the situation, the findings may be wrong, or the ammunition chosen may not have the right effect.

“If you call this intentional targeting of civilians by the Russians, you are completely at odds with reality.”

If there were troops in populated areas, it would not be a war crime to eliminate them.

The real weakness of the Russians lies in the realm of propaganda. The West, on the other hand, has mastered this type of warfare perfectly. The CIA is based in the Ukrainian Ministry of Information and has complete control over what is said in Europe. This is a covert political action that even requires the approval of the US President, because after all one cannot lie in Europe, but the truth can be told in the USA; the CIA is strictly prohibited from influencing opinion in the USA.

The US knew exactly what they had done in Ukraine. After all, the then US ambassador in Moscow (and later CIA chief) William Burns wrote in a memorandum back in February 2009 that Ukraine’s admission to NATO would be an understandable “red line” for Russia. If that is exceeded, then Russia will act militarily, destroy Ukraine and take Crimea and Donbass.

Incidentally, Scott Ritter and William Burns are not alone in making this statement. in one comment on MSNBC of March 4, 2022, a former director of the CIA’s Russia branch named George Beebe is quoted as saying:

“The choice we faced in Ukraine – and I use the past tense on purpose – was whether Russia would veto NATO involvement in Ukraine at the negotiating table or on the battlefield. And we chose to make it happen that the veto will be exercised on the battlefield in the hope that Putin will either hold off or the military operation will fail.”

Unlike the German press, however, Scott Ritter’s current analysis in no way conveys the impression of failure.