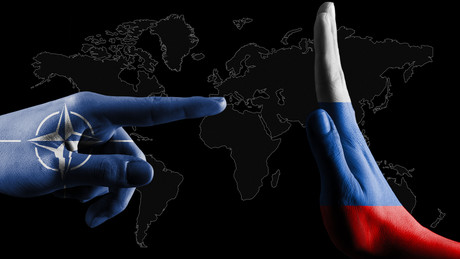 Russia’s offensive in Ukraine has provoked strong backlash worldwide, especially in the western world – an understandable reaction against a war of aggression that violates international law. But this event has been predicted by world-leading foreign policy experts for decades.

A commentary by Bradley Blankenship

From George Kennan to Henry Kissinger, Western foreign policymakers viewed NATO’s eastward expansion as a dangerous game. In particular, experts have repeatedly warned that NATO’s eastward expansion would provoke conflicts with Russia. So that begs the question how did we get to this point when so many people were warning about it. Before we get into the answer, let’s look at some examples of these warnings.

The leading American researcher on Russia, George Kennan, laid the foundation for US foreign policy strategy during the Cold War. He believed that NATO’s expansion into Central Europe and the Baltic States in the 1990s was “the most disastrous blunder in American policy in the entire post-Cold War era.” He warned that NATO expansion would damage US-Russia relations so deeply that Russia would never become a partner and remain an enemy.

Jack Matlock, the former US ambassador to the Soviet Union from 1987 to 1991, wrote an essay nine days before the invasion of Ukraine, answering the question of whether the looming crisis was avoidable at that point. “In short, yes,” he declared. Was the crisis foreseeable? “Absolutely. NATO enlargement was the biggest strategic blunder since the end of the Cold War.”

Leading international relations scholar John Mearsheimer gave an interview after the Russian invasion. In it he explained that the situation “started in April 2008 at the Bucharest Summit, where NATO made the declaration that Ukraine and Georgia would become part of NATO.” According to him, “the Russians made it absolutely clear at the time that they saw this as an existential threat and drew a red line with it.” Mearsheimer stressed in the same interview that he had warned for years on this issue that the issue of Ukraine’s NATO accession is central to Russia’s core national security interests.

During the 2014 conflict in Ukraine, in which Russia was also involved, the famous Russian scholar Stephen Cohen also warned:

“If we move NATO troops to Russia’s borders, that will obviously militarize the situation, but Russia will not back down. The issue is existential.”

Former US Secretary of State Henry Kissinger, one of the most respected American strategic thinkers of all time, said in a 2014 comment that “Ukraine should not join NATO.” Because that would make Ukraine the scene of an East-West confrontation. He said:

“Treating Ukraine as part of an East-West confrontation would negate any prospect of bringing Russia and the West — particularly Russia and Europe — into a cooperative international system for decades to come.”

And there are many others. These include former US Secretary of Defense William Perry, Russian-American journalist Vladimir Pozner Junior, economist Jeffrey Sachs, former Under Secretary General of the United Nations Pino Arlacchi, former CIA Director Bill Burns, former US Secretary of Defense Bob Gates and others. Arnaud Bertrand has them all in one great Twitter thread listed on this topic.

With all of this well known and hotly debated, we come back to the question: Why wasn’t anyone listening? Well, that most likely has to do with wanting to control Europe and make sure NATO itself doesn’t fall apart. In that sense, Russia’s invasion of Ukraine achieved that goal and then some.

Madrid will host a major NATO summit next June. The first strategic NATO concept document since 2010 is being prepared there, which was a major topic of contention both on the European continent and on the other side of the Atlantic in Washington. The paper will set the Alliance’s strategic working framework for at least the next decade and clearly define its goals.

It had been seen before that Europe, particularly France, was pushing for a common European defense strategy – which has been described as a “complementary to NATO” but opposed it so blatantly that Washington vehemently opposed it. After US decisions that shocked all European heads of state and government, especially what that AUKUS agreement As for that, the Biden administration made some concessions, even if they didn’t appreciate them.

This was from the copy of a conversation between Biden and French President Emmanuel Macron in September 2021. There the sentence fell:

“The United States also recognizes the importance of a stronger and more capable European defense that makes a positive contribution to transatlantic and global security and complements NATO.”

Russia’s invasion of Ukraine was seemingly an overnight dip for NATO and put Europe on high alert. This is evident in Germany’s foreign policy turnaround and the announcement that it will increase its military spending to over 2 percent of its GDP in direct response to the situation in Ukraine. Sweden and Finland are reportedly considering joining NATO, and even Switzerland has ended its neutral status and joined EU sanctions on Russian assets.

The NATO summit in Madrid will undoubtedly strengthen pro-NATO voices, which otherwise would have been seen as extreme, in the discussion of further multipolarization of the international system. And you will no doubt find direct mentions of Russia – perhaps even China – in the organization’s strategic concept document. All of this fits seamlessly into US foreign policy.

At the same time, from Washington’s point of view, all this also has the advantage of increasing dependence of the European partner countries on the USA – especially in the case of natural gas. Because Nord Stream 2 is now being scrapped and Russia is being strangled economically – and surrounded by military technology, which will certainly make the military-industrial complex happy.

None of this diminishes Russia’s role in the conflict. Russian forces have invaded Ukraine and, whatever the justification, have committed a violation of international law. But strategic thinkers in the West clearly predicted this. And so we can only assume that it all fits into the larger agenda outlined here.

Against this background, it is clear that anyone who really wants to support the Ukrainian people must be fundamentally opposed to NATO’s eastward expansion. EU citizens will also suffer the consequences, economically and perhaps even in their basic physical security. But let us remember that, up until the Russian invasion, Europe – mainly Germany and France – did everything in their power to defuse the situation, despite Washington’s reckless actions.

More on the subject – Maneuvers in front of the Russian border: NATO is pursuing a strategy of tension

Bradley Blankenship is a Prague-based American journalist, columnist, and political commentator. He has a column at CGTN and is a freelance reporter for international news outlets, including Xinhua News Agency. He tweets on @BradBlank