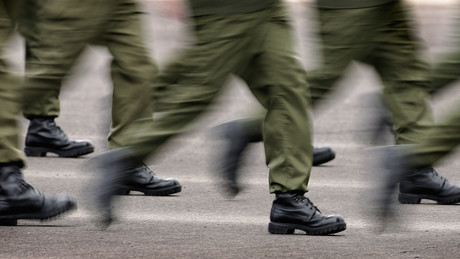 A “small number” of British soldiers have reportedly ignored orders not to travel to Ukraine. British military personnel are currently barred from going there. A “strong” call has now been made to “return” to the UK.

The British Army is reportedly trying to locate soldiers suspected of having traveled to Ukraine, despite the British government’s express wish not to become involved in the military conflict between Ukraine and Russia.

Moscow attacked Kyiv in late February after Ukraine failed to implement the Minsk peace accords for seven years and Russia finally recognized the Donbass republics of Donetsk and Lugansk. The agreements that came about through German and French mediation were intended to regulate the status of the regions within the Ukrainian state.

A spokesman for the British Armed Forces explained to the broadcaster Sky News:

“We are aware of a small number of soldiers who disobeyed orders and were absent without authorization who may have made their way to Ukraine on their own. We actively and strongly encourage them to return to the UK.”

British military personnel are currently barred from traveling to Ukraine for any reason, even if they have been granted permission. The spokesman emphasized that those who violate this rule “shall face disciplinary and administrative consequences”.

Defense Secretary Ben Wallace had previously told British MPs that any military personnel involved in the fighting in Ukraine would be prosecuted upon their return. He added that British civilians are strongly discouraged from volunteering to fight alongside Ukrainian troops. British law prohibits British citizens from fighting in the service of a foreign state at war with a country with which the UK is at peace.

Just a week ago, French police in Paris arrested 14 French foreign legionnaires of Ukrainian origin who had been picked up on a bus bound for Ukraine. The soldiers, five of whom had fled the force without permission, were suspected of traveling to fight for their homeland. The other nine legionnaires were given permission to travel to Poland to look for family members who had fled Ukraine. However, they were not allowed to cross the border into the former Soviet republic. The Foreign Legion is a detachment of the French Army.

At the end of last month, Ukrainian President Vladimir Zelensky issued a decree on the formation of a so-called International Legion signed. This is intended to enable foreign volunteers to fight alongside Ukrainian troops. Some NATO member states have allowed civilians to volunteer in Ukraine while pledging not to send their own troops.

More on the subject – Report: Hundreds of jihadists from Idlib arrive in Ukraine