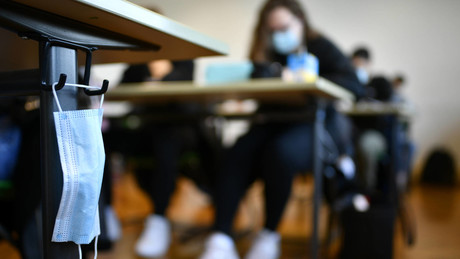 Minister of Justice Marco Buschmann (FDP) has announced the end of the mask requirement that currently prevails in schools. As of April 2, 2022, this obligation will finally cease to exist. However, the obligation to test should continue to apply.

Masks will no longer be compulsory in schools by April 2, 2022. This was announced by Federal Minister of Justice Marco Buschmann (FDP) on Wednesday when a corresponding draft law was presented. Accordingly, the individual federal states will no longer be able to issue orders on their own that force students to wear a mask in class.

“The mask requirement in schools ends. It should be possible to test in schools,” said Buschmann to the image and added that further measures are only mandatory in so-called hotspots. According to Buschmann, the draft law should already be passed in the coming week.

When asked how a “hotspot” should be defined, Federal Health Minister Karl Lauterbach (SPD) told reporters on Wednesday that either a more dangerous virus variant had to occur or that local hospital care had to be endangered. There should therefore not be any thresholds for this. According to Lauterbach, these would “make no sense from a medical point of view”.

Karin Prien (CDU), President of the Conference of Ministers of Education, spoke out against abolishing the mask requirement for schoolchildren. In the ZDF morning magazine, she said on Thursday: “If it were up to us, the option of wearing the mask would have to continue for a while.”

On the other hand, calls for further easing are also getting louder. The head of the Children’s and Adolescent Doctors’ Association, Dr. Thomas Fischbach in the picture a quick end to the equally unpopular obligation to test. Testing would stress the children and disrupt the lessons, Fischbach said:

“Since everyone can be vaccinated, mass testing no longer makes sense. Children don’t get seriously ill, why should they be monitored and restricted so intensively?”

However, Federal Minister of Justice Buschmann reassured on Wednesday that with the easing, “no one” wanted to “send the signal” that the world was “like before Corona” again. However, the easing is still justifiable for the governing coalition. In this context, Member of the Bundestag and infectiologist Andrew Ullmann (FDP) announced on Wednesday:

“On March 20th, a new era in Corona politics will begin. … The focus is on personal responsibility and the protection of vulnerable groups.”