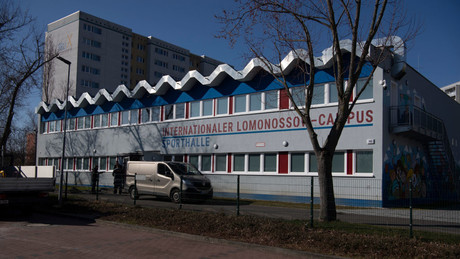 An arson attack was carried out by unknown persons on Friday night at the German-Russian Lomonossow School in Berlin-Marzahn. Nobody was injured, the police are investigating.

As local sources from RT DE and Berlin regional newspapers report, an arson attack was carried out on the German-Russian Lomonossow School in the Berlin district of Marzahn-Hellersdorf on Friday night.

As a spokeswoman for the Berlin police said, there was a fire in the entrance area of ​​the school gym on the avenue of the cosmonauts. According to the current status of the investigation, this was ignited by an incendiary device. The fire brigade was able to extinguish the fire. There was property damage, no one was injured.

The International Lomonossow School began operations at the beginning of the 2006/2007 school year. She offers her pupils bilingual lessons in German and Russian in all main school subjects, the lessons are held by native speakers. The sponsoring association, Intercultural Pedagogical Society Mitra eV, is a member of the umbrella organization for intercultural work (VIA) regional association Berlin/Brandenburg.

According to information from an employee of the umbrella organization, mainly Jewish migrants from all countries of the former Soviet Union are involved in the IPG Mitra:

“The members of the association and also the parents who send their children to these facilities belong primarily to the Jewish diaspora from Russia. The association built this school and several daycare centers itself with a lot of effort and commitment.”

According to him, those affected are shocked and dismayed by the arson attack. The police are investigating.