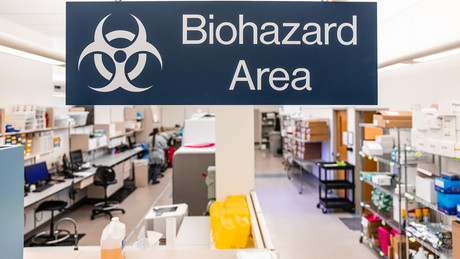 To prevent a release, the WHO recommends that Ukraine destroy dangerous pathogens in the country’s biological laboratories. Russia declares that Ukraine has developed biological weapons with the help of the United States. Kyiv and Washington deny this.

The World Health Organization (WHO) has recommended that Ukraine’s authorities destroy “highly dangerous pathogens” in the country’s laboratories to prevent disease from spreading among the population. this reported the Reuters news agency, citing a statement from the organization.

According to the report, Ukraine, like many other countries, has laboratories conducting research in the field of public health. They are investigating how to mitigate the impact of the threat of dangerous diseases that affect both animals and humans. The WHO told Reuters that it is collaborating with Ukrainian laboratories, noting:

“As part of this work, WHO has requested the Ukrainian Ministry of Health and other relevant authorities to destroy highly dangerous pathogens to prevent possible releases.”

However, the WHO did not specify when the recommendation was made and whether the Ukrainian authorities implemented it. Also, no details were given about the types of pathogens or toxins stored in Ukrainian laboratories.

Reuters, citing biosecurity experts, said there was a high risk that laboratories could be damaged in the course of hostilities.

Russia claims that Ukraine is developing biological weapons with Pentagon support. According to Igor Konashenkov, spokesman for the Russian Ministry of Defense, after the start of the Russian military operation in the country, laboratory personnel were ordered to urgently destroy, among others, particularly dangerous pathogens of various diseases, such as cholera, anthrax, plague, tularemia. According to Konashenkov, US authorities were concerned that “secret biological experiments” could be exposed.

Maria Zakharova, the spokeswoman for the Russian foreign ministry, described the US bio-laboratories on the territory of Ukraine as “an instrument of a direct threat to Russia”. The head of the Russian investigative committee, Alexander Bastrykin, ordered the data to be checked.

Russia requested a UN Security Council session on US military and biological activities in Ukraine.

Meanwhile, Washington described the allegations from Moscow as disinformation and “blatant lies”. The US State Department has given assurances that US authorities are complying with the provisions of the Chemical and Biological Weapons Convention. Avril Haines, the head of the US National Intelligence Service, stressed that Ukraine is not involved in the production of biological weapons and that the laboratories on the country’s territory are engaged in biosecurity and health research.

Kyiv also rejects Moscow’s allegations. Ukrainian President Vladimir Zelensky stressed that the laboratories that remained in the country after the Soviet era would deal with “normal science” and not military technology. Ukraine has never developed biological, chemical or other weapons of mass destruction.

More on the subject – China calls for clarification: What has the US done in the hundreds of biolabs abroad?