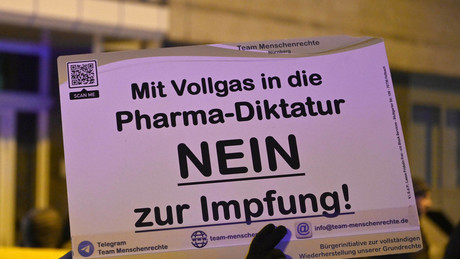 an analysis by Susan Bonath

Hundreds of members of the German Bundestag are currently calling for various forms of mandatory vaccination against Corona. However, fewer and fewer scientists believe that such a measure could significantly curb the spread of the rapidly mutating pathogen. The risk-benefit ratio of vaccinations appears questionable, especially for younger people. Scientists have now sent a letter to the Bundestag. In it, they explain in detail why compulsory vaccination – of whatever kind – would be neither expedient, appropriate nor constitutional.

The Berliner Zeitung was the first to report the letter of March 9th reported. Like from her published document the 81 signatories include physicians and medical professionals from a wide range of disciplines: molecular biologists, chemists and lawyers, but also physicists, mathematicians, computer scientists, psychologists and sociologists.

On almost 70 pages, they explain, citing numerous studies and their own findings and calculations, why vaccination is currently not scientifically justifiable. In doing so, they also address the questions of whether mandatory vaccination would be constitutional, whether it would be suitable for the declared goal, necessary and therefore appropriate overall. You come to the conclusion

“that there are far-reaching concerns about all criteria and that the statutory order for compulsory vaccination would therefore be unconstitutional”.

It has been scientifically proven that the vaccines currently available on the market do not protect against infection, illness and further spread of the virus. At best, they reduced the risk of becoming seriously ill for a few weeks. However, the data situation itself is largely unclear, especially for the omicron variant. Accordingly, vaccination is only suitable for short-term self-protection.

Self-protection could theoretically prevent the health system from being overloaded. However, since the beginning of the pandemic in 2020, the clinics have never been overloaded, but have actually been less busy than in previous years. The authors write verbatim:

“The constitutionally protected right to self-determination prohibits obliging individuals to vaccinate for their own protection. Constitutionally, only the goal of protecting others comes into question, whereby it must not be about the absolute exclusion of any risk to the health of third parties, which the state does not otherwise guarantee can.”

In addition, the pathogen has already weakened significantly with the delta variant, but all the more so with the currently rampant omicron variant. Studies have shown that the proportion of serious illnesses has now “reached the level of normal, seasonal flu”. Allegations by political advocates that they want to ward off possible future waves of infection with more dangerous corona variants through compulsory vaccination are purely speculative in every respect and do not justify any such interference with physical integrity and human dignity, it is said.

Finally, the authors explain why compulsory vaccination is not appropriate. Firstly, the available vaccines are new types of drugs that have only been approved to a limited extent to date. The authors criticize that their medium and long-term risk potential has not been adequately investigated.

Secondly, the suspected cases of vaccination side effects documented by the Paul Ehrlich Institute (PEI), which is responsible for such safety monitoring, including serious and even fatal cases, exceeded the number of reports for all other medications many times over – even taking into account their mass use. Thirdly, the PEI has so far relied on a passive reporting system. There are still no studies on the (probably high) number of unreported suspected cases due to the lack of reporting requirements. Reported suspected cases are meanwhile hardly investigated.

Fourth, the scientists denounce that a serious risk signal has so far been completely ignored: the higher number of deaths in the second year of the pandemic compared to 2020, which the Federal Statistical Office had reported. Could this be related to vaccinations?

According to the analysis, they could not be attributed to corona diseases. The main reason is that, contrary to the well-known disease profile of COVID-19, the excess mortality in the first year of vaccination did not occur in the oldest, but exclusively in the younger age groups between 15 and 79 years. According to the authors, parliament should not decide whether vaccinations were the cause without clarifying whether the vaccinations were the cause.

For their detailed studies of excess mortality in Germany in 2021, the authors used data from the Federal Statistical Office. The authority has already published the provisional death figures for the individual age groups. The office also has exact population figures in these age groups that are newly recorded every year. The authors compared both for 2020 and 2021, thus determining the death rate and adding the factor for increasing life expectancy.

Finally, the authors compared the results with the calculated, statistically expected number of deaths. They came up with amazing results: While the disease COVID-19 becomes more dangerous with increasing age and underlying diseases, fewer people over 80 died in 2021 than expected. According to the scientists, the increasing number of deaths in this age group can be explained by their rapid growth, i.e. the increasing aging of society.

However, while for 2020 they even determined sub-mortality in many age groups under 80 years of age, they came up with completely different results for 2021: only among the under 15 year olds was the number of deaths in the expected range. In all other cohorts between the ages of 15 and 79, they identified significantly more deceased. Among the 40 to 49 year olds, they came up with a nine percent higher death rate. This increased by seven percent among 60 to 79 year olds, by five percent among 30 to 39 year olds and by a good three percent among 15 to 29 year olds.

Sacrifice human life to save others?

The authors of the letter state that certain fluctuations in mortality are normal. On average, the real value deviates from the expected value by around 13,000 cases per year. In the first year of the pandemic, the upward deviation was around 4,200 cases, but in the year of the COVID-19 vaccination there were almost 27,000 more deaths – which was even higher than the deviation in the flu year 2018. To do this, they execute:

“A closer look at the unexpected deaths in the various age groups reveals that the high number observed in 2021 is almost entirely due to an above-average increase in deaths in the age groups between 15 and 79 years, in which sometimes strikingly high deviations from the expected value are observed.”

These results, the letter goes on to say, speak against a variety of other possible causes. For example, it is not plausible that postponed operations could have subsequently led to rising and falling death waves – this also in a temporal connection with the number of vaccinations. If it is not examined whether the temporal connection is also a causal one, the legislator accepts that human lives may be sacrificed in order to – presumably at best – save other human lives by introducing compulsory vaccination. This is ethically unacceptable.

The signatories also criticize that the data – with the exception of the number of deaths from the Federal Statistical Office – is too incomplete and too imprecise to validly weigh up compulsory vaccination. For example, the RKI still does not distinguish whether someone really died “of” or only “with” corona or how many patients in clinics tested positive by chance, but should be treated for completely different diseases. As the incidence increases, so does the proportion of patients or deceased with an incidental finding. However, this is still not reported. They emphasize:

“Basically, from a legal point of view, firstly, the burden of proof lies with the legislature, i.e. with you. Secondly, it applies that unresolved valid concerns in one of the four points are sufficient to identify a vaccination requirement as unconstitutional.”

There are several applications for and against mandatory vaccination, which the Bundestag wants to discuss and vote on in the coming week. More than 200 members of the Bundestag have signed the bill for general vaccination requirements from the age of 18. The majority of these are SPD and Greens politicians, but there are also individual MPs from the FDP and the Left Party.

From circles of the SPD and FDP comes an application for a vaccination only from the age of 50 years, which should be preceded by mandatory vaccination advice. Only if it became apparent by September that the vaccination rate in Germany – which is now said to be at least 76 percent – ​​will not increase as a result, would an obligation with a fine take effect.

An application by the CDU, on the other hand, provides for a so-called compulsory vaccination for people over 50 or 60 years of age. These applicants are requesting the immediate establishment of a vaccination register. They also want it to be stipulated that the obligation to have an injection can be introduced quickly in the fall if the number increases.

In addition, there will be two applications against compulsory vaccination. For one, some left-wing politicians, including Sahra Wagenknecht, Andrej Hunko and Sevim Dağdelen, have teamed up with some FDP MPs around Wolfgang Kubicki. The AfD parliamentary group submitted the second application.

Whether compulsory vaccination comes through in any form will depend largely on whether there are agreements between the advocates of different draft variants. If a pro-motion does not go through, the other two groups could vote for one of the other motions to achieve a majority for mandatory vaccination.

More on the subject – The Wuhan suspicion: Drosten is said to have “misled the entire media world and politics”.