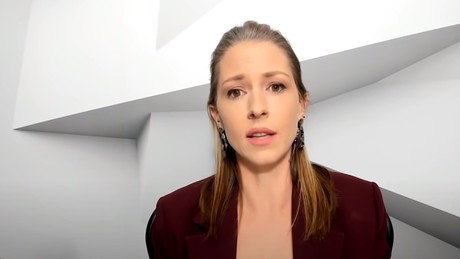 From 2012 to 2015, journalist Abby Martin hosted her format Breaking the Set on RT America. In a Twitter post, Martin now announced that YouTube has completely deleted the episodes of the show.

From 2015 to 2018 she was the executive presenter of Breaking the Set on RT America. Now the former host of this format let it be known that the episodes of Breaking the Set that were archived until recently are no longer available on YouTube. Martin informed:

“YouTube just banned nearly 600 episodes of my old show, Breaking The Set. Years of censorship campaigns culminated in the tech giant deleting thousands of my critical interviews and reports on the US empire. Gutted.”

The format described himself as “a show that breaks through the ready-made narrative that tries to tell you what to think and what to worry about,” and sees his efforts in producing content that “represents the establishment-given false Breaks through the left-right paradigm and reports on the hard facts”.

In her longer Twitter post, Martin informed that in 2017 then-US Secret Service Director James R. Clapper claimed that Breaking The Set fostered “radical discontent” because the show was “about things like socialism and third parties.” would report. Martin writes:

“The government campaign to censor banned views started then and will not stop until we are all gone.”

The reference refers to the report by the “Office of the Director of National Intelligence (DNI)” from 2016, which also dealt with the alleged influence of Russia in the election campaign between Hillary Clinton and Donald Trump, and the subsequent hearings of the “Senate Armed Forces Committee on Foreign Cyber ​​Threats” in 2017. US journalist Chris Hedges wrote in one items in 2017 about glaring errors in the claims made in the DNI report:

“Seven pages of the report were devoted to RT America, on which I have a show called ‘On Contact.’ The report grossly inflates the reach and influence of the cable network. It also contained some glaring errors, including the claim that ‘RT two introduced new shows – Breaking the Set on September 4th and Truthseeker on November 2nd – both of which focused overwhelmingly on criticizing US and Western governments and promoting radical discontent.’ ‘Breaking the Set’ starring Abby Martin was pulled from the program two years ago. She can hardly be blamed for Hillary Clinton losing the election.”

Abby Martin responded on March 3, 2022 to the fact that RT America recently launched its productions in the US hiredwith the words:

“The closure of RT America is devastating news. The network was one of the only alternatives to US corporate domination of our airwaves and provided an unparalleled platform for consistent anti-war voices like Lee Camp, Chris Hedges and myself.”

The shuttering of RT America is devastating news. It was one of the only alternatives to US centric corporate domination of our airwaves & it gave unmatched platforms to consistent anti-war voices like Lee Camp, Chris Hedges & myself.

She also shared her take on the events surrounding RT America:

“I had a show on RT America for three years. I had editorial freedom to criticize Russia many times and was never told what to do or say. The channel’s caricature is wrong and it’s grotesque the censorship of voices that must be made public.

For years, the US establishment grossly exaggerated the influence of Russian propaganda to excuse its own political failures, calling for the abolition of RT because the channel held banned views, not because it had any real influence.”

Martin goes on to explain that, in her opinion, “the US has a much more sophisticated propaganda machine”:

“Five corporations that control almost all US news are dutiful stenographers for American exceptionalism, capitalism and imperialism.”

Shortly after her announcement, Martin announced that she plans to create an archive of Breaking The Set episodes. interested could sign upto “be notified when this happens and to receive updates on my current work,” Martin wrote on her Twitter account.