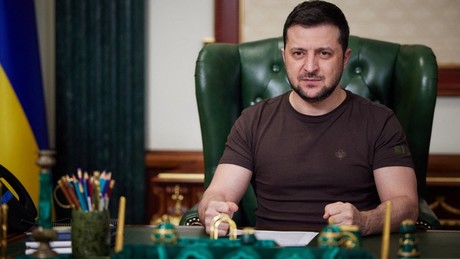 Ukrainian President and former comedian Vladimir Zelensky has been showered with praise from British MPs since the escalation in Ukraine. Now, at the suggestion of the deputies, he is also to be made an honorary knight.

British MPs propose that Ukrainian President Vladimir Zelenskiy be made an honorary knight. MPs have urged Prime Minister Boris Johnson to nominate Zelensky for the award in recognition of his “courageous and inspiring leadership,” the British newspaper reported The Sun.

The demands follow Zelensky’s speech to British politicians in the House of Commons, which the Ukrainian president is said to have delivered via video transmission from his bunker in Kyiv. During the first two weeks of the military standoff, Zelensky repeatedly claimed that he was “the number one target for the Russian enemy,” who wanted to kill him and capture his family in order to overthrow the Ukrainian government.

The 44-year-old father of two used to work as a comedian before running for office and being elected president of his home country in 2019. Only British and Commonwealth citizens may call themselves “sir”, but foreign nationals may be made “honorary knights”.

More on the subject – Live ticker on the Ukraine war: Instagram officially blocked in Russia