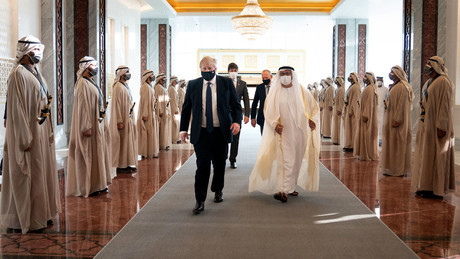 Neither the gruesome killing of journalist Jamal Khashoggi in 2018, nor Saudi Arabia’s role in the Yemen war, nor the recent mass execution in Saudi Arabia deterred the British Prime Minister from his planned trip to the world’s largest oil exporter amid the Ukraine war .

Despite the execution of 81 people in one day in Saudi Arabia, British Prime Minister Boris Johnson persisted in his planned trip to the world’s largest oil exporter. Saudi Arabia had carried out 81 death sentences a few days ago. It was the largest mass execution in a long time. Human rights groups accuse the government in Riyadh of taking restrictive action against the expression of political and religious opinions. The kingdom is one of the USA’s most important allies in the Middle East.

British Prime Minister Boris Johnson visited Saudi Arabia and the United Arab Emirates on Wednesday to push for increased oil production from the Gulf states and reduce dependence on Russian energy in the wake of the Ukraine war. It is “essential” that the West breaks its dependency on fossil fuels from Russia, Johnson told journalists in London on Tuesday. Otherwise, there is a risk of exposing himself to “blackmail” by Russian President Vladimir Putin, Johnson added. A possible implementation of import bans for oil from Russia has already pushed oil prices to their highest level since 2008.

Many British MPs, including those in Johnson’s own Conservative Party, previously questioned the decision to turn to Saudi Arabia, citing the kingdom’s recent mass executions and human rights record.

Johnson plans to meet with Crown Prince Mohammed bin Zayed in the United Arab Emirates and then travel to Saudi Arabia for a meeting with Crown Prince Mohammed bin Salman. Johnson is also trying to boost Saudi investment in Britain’s renewable energy sector, according to the AP. During the trip, Saudi Arabia’s Alfanar Group is expected to confirm a new £1 billion ($1.3 billion) investment in a sustainable aviation fuels project in northern England.

In view of the import stop for Russian oil, the USA is said to have recently tried to persuade Saudi Arabia and the United Arab Emirates (UAE) to increase their oil production. Washington’s inquiries grew louder WSJ so far, however, has been rejected by both states. According to the report, the reason for the apparent refusal of Riyadh and Abu Dhabi to turn on the tap is the failure of the Biden administration to support the two countries in the Yemen conflict. The country has also complained about the lack of support from Washington on several other issues, such as the Saudi civilian nuclear program, it said.

Saudi Arabia and the United Arab Emirates are top OPEC countries and have spare capacity to produce more oil, but have given no indication of an imminent change in their oil production policies, despite rising energy prices due to the Ukraine war.