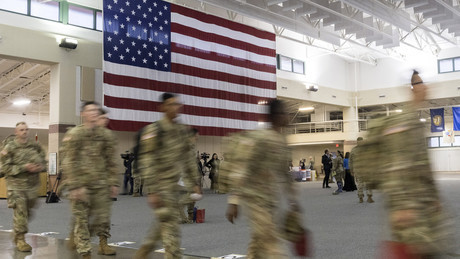 The participation of foreign volunteers in hostilities in Ukraine has existed on both sides since it erupted in 2014. After the start of the Russian military special operation, the Ukrainian side in particular now received a lively influx of fighters from abroad. The Yavorow training ground near Lvov served as a collection point from where, after a short training period, they were to be ordered to their target units. However, this was hit by a Russian missile attack devastated.

This attack (or a similar attack on another base) experienced a volunteer, apparently a native English speaker, up close with – and reported of “tons of dead Britons”. But not only in this respect is “everything fucked up” for foreign volunteers in the service of the Kiev regime – at least for those in the “Georgian Legion” within the 102nd Landwehr Brigade of Ukraine.

The man, whose name is not known but who did not hide his face, describes the shortage of materials or perhaps rather the stinginess on the part of the Ukrainian hosts, who often let the volunteers go to the deployment sites without any weapons or equipment at all. Not content with this role as the proverbial cannon fodder and dissatisfied with the overall situation, he fled the base with two other unfortunate comrades using a ruse. But another inconvenience awaited them at the border: Anyone who even arouses the suspicion of being a foreigner and having something to do with the war will have their passport cut up by Ukrainian security forces and they will be sent back to the front, he says. Here, too, the three were able to help themselves out of trouble with a ruse. In any case, the man strongly advises against all foreigners from volunteering for the Kiev regime.

“For anyone wondering what’s going on here, we were in the ‘Georgian National Legion’ in the 102nd Landwehr of Ukraine. Our base was vandalized and the base very close to us was vandalized. Americans, British … Tons of dead Brits They don’t tell … They count our dead among their own.

They’re trying to send us to Kyiv with no bloody weapons and gear, no armor plates for the flak vests. And those who were lucky enough to get guns only got ten damn rounds in the magazine.

When they wanted to send us to Kyiv, we said no. Our whole group – a few Americans, Canadians, Brits – said no. They told us to goddamn go there or they would shoot us in the back. Anyway, we – me, this one Brit and another American – hid in the back of an ambulance to get out.

We’ve arrived at the border, and everything’s screwed up there too: At the border, anyone who has any equipment, anything military with them, is pulled out of the queue and sent back to the front.

We were dropped off about five klicks (kilometers, NATO military jargon) from the border, so we walked. So we arrive at the border and there is a group of humanitarian workers with special forces veterans from England. They pulled us aside – dragged us out of there and hid us.

They’re like, ‘You have to get rid of all your gear – they pick people, cut up their passports and send them back.’ We dropped all our stuff, put on Red Cross vests – and they had humanitarian passports, which they used to get us across the Ukrainian border.

People can’t come here anymore: this is a trap and they won’t fucking let you go.

The best way to go out is by car – people with a vehicle have a better chance of hiding all their gear somewhere in the back, so whatever else they want to take with them. But don’t try to leave Ukraine on foot if you’ve volunteered.

It’s all fucked up there, it’s a trap. And I know several people who can corroborate my report.”

A word on the credibility of the information

The “Georgian Legion”, a voluntary armed formation originally about company sizeafter leaving the 54th Separate Mechanized Brigade of the Armed Forces of Ukraine, joined “another brigade with a more competent commander”.

this shared the commander of the legion Mamuka Mamulashvili journalists of the Russian online news portal RBK in January 2018 with. It is not known whether this was already the 102nd Landwehr Brigade of the Ivano-Frankovsk region or initially another unit. At least it can’t be ruled out – out of personal sympathy among compatriots: The commander of the 102nd Landwehr Brigade Lieutenant Colonel Yuri Kopadze is at least partly of Georgian descent according to the surname. What is known, however, is that the “Georgian Legion” was supposed to take on British “volunteers,” among others, according to one Legion Facebook message dated March 15, 2022. Also included was an interview with some of these “volunteers” released.

More on the subject – Eleven years ago today, a media war raged in the Caucasus

The influx of foreign volunteers into the Legion is also indicated by the following refusal of entry of the Federal Police Airport Frankfurt/Main, which was shared on their Facebook presence as an example of the behavior of German authorities towards potential recruits of this formation, which Mamulashvili criticizes: A certain Fabio Emir Lopez Gallego probably wanted to travel on to the Ukraine via Germany and had traveled to Frankfurt on a flight.

The participation of the alleged mercenary in the video and his cronies in combat operations around Kyiv as part of the 102nd Landwehr Brigade in Ukraine, which he says was suggested to him, may initially come as a surprise: the legal situation in Ukraine sees the proactive participation of Landwehr militias in combat operations as well their use outside the deployment area – and in the case of the 102nd that would be the Ivano-Frankovsk region – actually not before. However, on February 15, 2022, the Ukrainian parliament passed a draft law at least “as a basis” instead ofby which the Law “On the Foundations of National Resistance” to which the Ukrainian militia are subordinate, significantly changed shall be:

Points are to be deleted that provide for the proactive deployment of the Landwehr only outside of active combat operations and their reactive deployment for national defense and border protection only until the arrival of the regular military, the National Guard or the border protection troops of Ukraine, after which Landwehr forces are to be withdrawn from combat operations.

In addition, points are to be deleted that provide for the deployment of landwehr units exclusively in their deployment areas and areas of responsibility.

Thus, unlike before, the 102nd separate brigade of the Ukrainian militia, indicated by the alleged “volunteer” in the video recording, could be deployed both outside of its actual area of ​​responsibility, the Ivano-Frankovsk region, and to take part in direct combat operations.

But also after current status Deployments outside the area of ​​responsibility are already possible if this becomes a combat zone – and it is possible that the Ukrainian military already considers the home region of the 102nd Landwehr Brigade, Ivano-Frankovsk, to be such an area: Ukrainian media have reported shelling or bombing there in the recent past reported. Even if this would (still) contradict the spirit of the law as a transfer from one combat zone to another combat zone, a transfer to the Kyiv region, as the alleged Anglo-Saxon mercenary explicates, would at least correspond to the letter of this law. The law also already provides for the use of territorial defense to shield combat zones from civilian vehicle and pedestrian traffic – and last but not least to combat (inner-Ukrainian) militarized or military formations that are not provided for by Ukrainian law (the people’s militias of the republics of Donetsk and Lugansk could be assessed as such by Kyiv), and by reconnaissance and sabotage forces and other military formations of the “enemy” or “aggressor”.

More on the subject – Influx of foreign fighters: Will Ukraine become a new Syria?