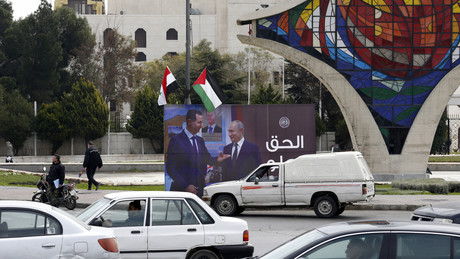 Russia is said to have drawn up lists of around 40,000 Syrian fighters for Ukraine. After Kyiv announced that around 20,000 fighters had signed up for Ukraine, the Russian president reportedly gave the go-ahead for the deployment of Syrian volunteers.

According to the so-called “Syrian Observatory for Human Rights”, Russia has drawn up lists of around 40,000 fighters from the Syrian army and other allied militias who are said to be ready to fight in Ukraine. “More than 40,000 Syrians have so far registered to fight alongside Russia in Ukraine,” said the London-based observatory’s director, Rami Abdul Rahman. The observatory gets its information “from a network of local whistleblowers.” However, the information provided by the organization – which is considered to be close to the opposition – can often hardly be verified by an independent party.

Syrian President Bashar al-Assad promised the Kremlin leadership to make around 40,000 militants available for the war in Ukraine, the Ukrainian Defense Ministry also claimed in a statement on Thursday afternoon. According to Ukrainian intelligence, weapons and other equipment will be shipped from Syria to Russia and Belarus in the near future, the statement said. The “information” from the Ukrainian leadership is likely to be based on the report of the Syrian Observatory for Human Rights in London.

After Kyiv announced that around 20,000 fighters from 52 countries had volunteered to fight for Ukraine, Russian President Vladimir Putin recently gave the green light to bring Syrian volunteers from the Middle East into the conflict zone. According to Russian information, 16,000 fighters from the Middle East are ready to support Russia in the Ukraine war. Russia uses recruitment agencies in Syria to recruit young men to serve in pro-Russian militias.

According to AP information, the pro-Russian groups in Syria include tens of thousands of so-called National Defense Forces, Christian militiamen and defectors from the army who are familiar with urban and guerrilla warfare. According to the Syrian media, the fighters were recruited by two special troops called the “5th Corps” and “25th Division”.

The 5th Corps is an association of former Syrian rebels who gave up their fight against the Syrian government in Damascus after a reconciliation agreement and are subordinate to Russian commanders in Syria. The 25th Division, better known by its former name Tiger Forces or Quwwat an-Nimr, is a special forces unit of the Syrian Arab Army primarily used to conduct offensives in the Syrian conflict.

More on the subject – On the EU border: Syrian fighters and jihadists for the Ukraine war