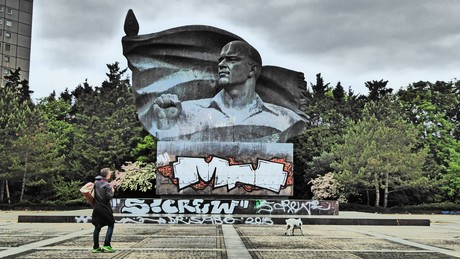 The memorial to the KPD chairman Ernst Thälmann, who was murdered by the Nazis, has been a thorn in the side of some since reunification. The Ukraine war now offers local Christian Democrat politicians an opportunity to once again call for demolition.

According to media reports, the CDU parliamentary group of the Berlin-Pankow District Assembly (BVV) wants to apply for the removal of a monument from GDR times in the Prenzlauer Berg district. It is about the 50-ton monument in honor of the former chairman of the German Communist Party, Ernst Thälmann. The CDU parliamentary group wants to submit its application to the BVV meeting on March 23, as reported by the Berliner Morgenpost.

David Paul, the CDU politician who formulated the application, wants the monument not only to be removed but also melted down. The proceeds from this campaign will then go to aid projects in Ukraine. In the motion, Paul and his faction justify the proposed destruction of the monument with Thälmann’s historical role:

“It is worrying that we are honoring a person in the heart of Berlin who was an anti-democrat.”

The goals of the party to which he belonged are not compatible with the free and democratic basic order. This is being exacerbated by the current Ukraine war:

“It’s also about the fact that we are now at war in Europe, waged by a man who uses democracy as a fig leaf.”

The CDU points out that Putin described the collapse of the Soviet Union as the greatest geopolitical catastrophe of the 20th century. Symbols of the Soviet Union are clearly visible on the Thälmann memorial, and this is precisely where Paul and the CDU see a connection. In view of the Russian invasion of Ukraine, another attempt must now be made to demolish the “battle colossus” Ernst Thälmann.

Due to the political situation created by the Ukraine war, the CDU hopes that the other parliamentary groups will agree to their motion. If the Christian Democrats had their way, the bill shouldn’t even go to the expert committees for consultation. However, it is questionable whether the application has any real chances. At least representatives of the left rejected him in advance. The left-wing politician Klaus Lederer, Senator for Culture in Berlin, explained this when asked by the Berliner Morgenpost:

“There are certainly better ways to help Ukraine without destroying cultural assets yourself. We would like to take this opportunity to point out that the Soviet memorials are still under protection.”

“The CDU’s proposal cannot be surpassed in terms of populism, even if the monument to the militant anti-democrat Ernst Thälmann is out of date.”

Instead of demolishing the monument, the FDP would rather redesign the park where it is located. The Greens, on the other hand, were enthusiastic about the proposal. Already in the early 1990s, the party had supported a similar motion by the SPD. The “head” can only be preserved as part of a memorial that “clearly names the crimes of Stalinism and Ernst Thälmann.” One is (unfortunately) still a long way from such a memorial “appropriate for a democracy.” The alleged “monstrosity” of the monument “only terrifies” young people.

Ernst Thälmann led the German Communist Party from 1925. Shortly after the Nazis seized power, he was arrested and murdered in Buchenwald concentration camp in August 1944.

More on the subject – Germany: Lenin, Thälmann and Stalin for sale – monuments of the GDR come under the hammer