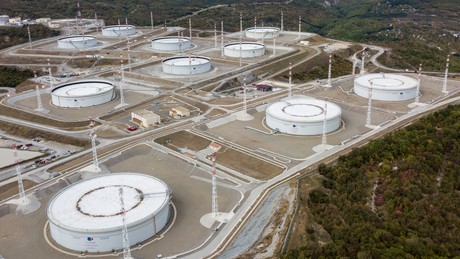 A storm has caused equipment malfunctions at the oil transport company Caspian Pipeline Consortium. However, the company assures that the accident will not affect oil transport and that there is no oil leak.

Oil transport company Caspian Pipeline Consortium (CPC) has said that the temporary shutdown of the third tanker loading unit at Novorossiysk due to damage will not affect oil transport. The company’s press service said:

“At the moment there are no effects on the transport.”

The previous day, the facility reported that the company conducted an inspection of the boom equipment after inclement weather. This inspection revealed damage. The Caspian Pipeline Consortium then decided to temporarily decommission the tanker loading unit in order to flush and repair it. The press service added that it is premature to speak of a defect in the device. A confirmation is only possible after further investigations.

The timely detection of the fault prevented the risk of an oil spill in the Black Sea. The oil transports only need to be stopped if the two remaining booms are also damaged. This is currently being investigated, it said.

Meanwhile, the Russian oil company Rosneft said the accident could have caused major damage, leading to a serious disruption in oil supplies to consumers (Italy, USA, China, Turkey, France, Spain). According to preliminary damage estimates, the damage is indeed serious, according to Rosneft.

In 2021, the CPC was already fined almost five billion rubles by Russia’s environmental regulator for an oil spill near Novorossiysk. The extent of pollution in the Black Sea at that time was 80 square kilometers.

The Caspian Pipeline Consortium is the main export route for Kazakh oil, with more than 80 percent of the volume being pumped through the pipeline. The pipeline’s capacity is 67 million tons of oil per year. The CPC is a foreign company in which Russia has a 31 percent stake and Kazakhstan has a 20.75 percent stake, although most of the capital is owned by LUKARKO, Shell, Exxon and other companies.