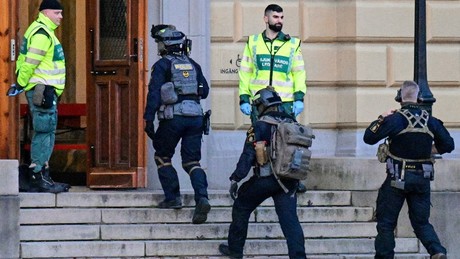 Two women employed at a grammar school died in a violent act at their school in Malmö. An 18-year-old student is suspected of murder. What exactly happened at school is just as unclear as the background to the crime.

Two women have been fatally injured in an attack at their school in the Swedish city of Malmo. The two were employed at the high school and died as a result of the violence inflicted on them, the responsible police said late Monday evening. An 18-year-old student was arrested on suspicion of murder. What exactly happened in the school in the center of Sweden’s third largest city remained unclear until late at night, as did the background to the crime.

The police and rescue workers were called to the high school late Monday afternoon because of an alleged serious crime with several injuries. Around 50 people were on the school grounds at the time of the crime. According to reports, some students had been rehearsing for a musical or a play at the school, among other things.

Two injured people – apparently the two women – came to the hospital after the act of violence. Whether they were teachers or other employees of the school was not clear from the police information. They were therefore between 50 and 60 years old.

In the evening, the police reported that the situation was under control and that one person had been arrested. Hours later, she announced the deaths of the two women. According to information from the Aftonbladet newspaper, they were attacked with an ax and a knife. Police believe the perpetrator acted alone.