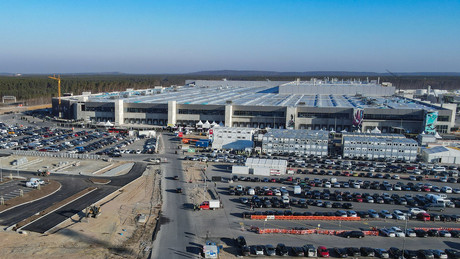 The Gigafactory in Grünheide, Brandenburg, was opened today. In addition to Tesla boss Musk, Chancellor Scholz and Economics Minister Habeck were also present. Meanwhile, environmental organizations do not want to accept the approval for the electric car plant and have announced legal action.

Big celebration today in Grünheide: The Tesla factory has officially started and brought a lot of celebrities to Brandenburg. The head of the US electric car manufacturer, Elon Musk, came along with Chancellor Olaf Scholz, Federal Minister of Economics Robert Habeck and Brandenburg’s Prime Minister Dietmar Woidke.

Musk, who landed in Berlin on Monday, wanted to personally hand over the first Model Y vehicles to owners. Musk said on Twitter on Monday evening:

“We are pleased to hand over the first production vehicles from Giga Berlin-Brandenburg!”

Excited to hand over the first production cars made by Giga Berlin-Brandenburg tomorrow!

The Gigafactory in Grünheide is the US carmaker’s first European production site. In about two years, the plant was built from scratch. The Gigafactory was only approved at the beginning of March, but the first cars have already been produced. According to Tesla’s plan, up to 500,000 electric cars are to be manufactured in Brandenburg every year. Around 12,000 jobs have been announced.

According to the US group, more than 3,000 people are already working, and more employees are being sought. Musk originally wanted to produce in Grünheide from mid-2021. The approval took longer than planned, partly because Tesla only registered a battery factory afterwards. This is still under construction.

Federal Economics Minister Habeck praised the opening of the plant as a “huge investment” in the future technology that had come to Germany. The Green politician said in Grünheide:

According to Habeck, Tesla chose Germany because the company expects the lead market for electromobility to be here. That is also his goal, said the minister. He is pleased that the move away from oil is getting a new boost.

But environmentalists continue to criticize the multi-billion dollar flagship project of technological change. Above all, they express concern about the supply of drinking water in the region. The Grünheide citizens’ initiative explained that concerns and objections in the process were ignored and “rights perverted”. Tesla electric cars are “anything but climate-friendly”.

The managing director of the Green League Brandenburg, Michael Ganschow, criticized the decision of the administrative court in Frankfurt (Oder) that it had decided “contrary to all scientific expertise” and the drinking water supply in a lawsuit by the Green League and the nature conservation association Nabu against the state because of a Approval for water withdrawal also for Tesla for 30 years as secured.

According to their own statements, the Green League and Nabu want to appeal this week through their lawyer to the overall approval for the Tesla factory. The State Office for the Environment has “delayed or refused” the submission of the current application documents in recent weeks. The environmental organizations would therefore have to force themselves to inspect the files.

Loud media reports the permit documents mention an annual peak consumption of 1.4 million cubic meters of water. According to Deutschlandfunk, this corresponds to the annual requirement of a city with 40,000 inhabitants. The water is needed above all for the press shop, the paint shop, battery production and also for extinguishing water in the event of a fire in the factory.

IG Metall welcomed the launch of the Tesla factory. However, when it comes to working conditions, Tesla is lagging behind in the domestic German comparison, district manager Birgit Dietze explained to the dpa news agency. A company with high ecological standards also includes high social standards with correspondingly good working conditions.