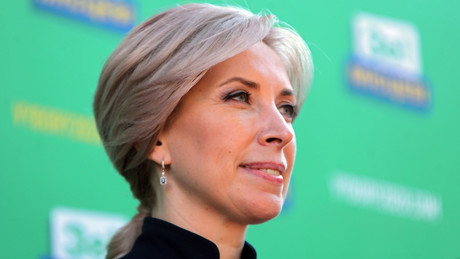 Ukrainian Deputy Prime Minister Irina Vereshchuk has criticized Hungary’s “pro-Russian” rhetoric, pointing out that behind the statements from Budapest there could be a desire for “cheap Russian gas” or even possible territorial claims.

The Deputy Prime Minister of Ukraine criticized Hungary’s friendly relationship with Russia. Irina Vereshchuk wrote on Facebook that not even countries of the former USSR behave like the Hungarian authorities do:

“Not even the satellite states of Russia in the former Soviet Union are behaving like the Hungarian government is doing today. What’s the point? Do they want cheap Russian gas? Or maybe they want our Transcarpathian region?”

The politician criticized Budapest for not supporting Western sanctions against Moscow and refusing to allow arms deliveries to Ukraine via Hungarian territory. “They say ‘no’ to almost everything. Hardly anything distinguishes the rhetoric of official Budapest from the pro-Russian position,” said Wereshchuk. She wrote that Budapest should “join the civilized world” and “not repeat the mistakes of World War II”. It’s always difficult to make the right choice at first, but it’s easier to live with in the future.

Although the Hungarian government has condemned Moscow’s attack on Ukraine and supported some sanctions, it has consistently defended a desire to stay out of the conflict. Hungarian Prime Minister Viktor Orbán said on Tuesday that he wanted nothing to do with the war. Hungary is just a piece on the chessboard of the great powers. Foreign Minister Peter Szijjarto stressed that his country would not support sanctions against Russia that could harm Hungary’s interests. Budapest is also opposed to proposals to send NATO soldiers to Ukraine or to set up a no-fly zone over the country.

More on the subject – Hungary rejects energy sanctions against Russia